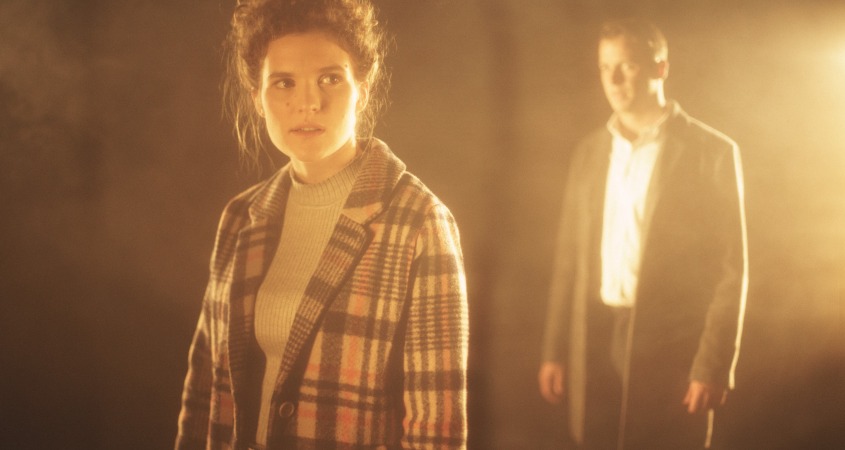 Two strangers find themselves on a train, politely asking each other where the train is heading and which stop was last. Neither can remember anything but they are certain they know something and that they make sense, though they cannot explain why. And so, a loop ensues with the characters constantly waking at different times and in different parts of the train. The various timelines interweave and dare the audience to try and unravel the puzzle that playwright and director Martin Quinn has woven.

The voice of the writing and overarching mood of abandoned expanse puts the audience in Beckett territory immediately, so it is no surprise that the celebrated absurdist is cited as an inspiration for the production. From the outset, we know the ending will not be a plot-satisfying, linear conclusion – but that does not mean the ride is any less enjoyable.

This is a play that invites you to contemplate. Quinn’s grasp on language is so masterful it becomes a joy to listen to his wordplay. Quinn toys with the use of seemingly concrete language to define concepts as fluid as memory and meaning.

There are moments where the philosophical underpinnings of the show feel a little heavy-handed, like when the characters describe what the play had previously only alluded to. However, these instances are brief and never detract from the overall artistry of the writing. Frazer Lee and Katherine Pearson read the text beautifully, with their emotional transitions and timeliness being flawless.

The true heroes of this production are the lighting, set and sound designers. Adelaide Harney, Alaina Bodley and Edwin Cheah’s designs are inspiring to see in a black box theatre. The atmosphere of simultaneous claustrophobia and eternity that the set design and lighting manage to create is superb. The sound is another character in this production: it is the train and the expanse, it is what haunts the characters.

Glassbreaker Productions are a new and exciting company established in 2018. Two on the Night Train features in their work as a fresh and wonderful glimpse into the sorts of philosophical and spectacularly literary shows we can expect in the future.

Two on the Night Train runs at Gasworks Arts Park until 22 June. Tickets can be purchased online or by calling the box office on (03) 8606 4200.