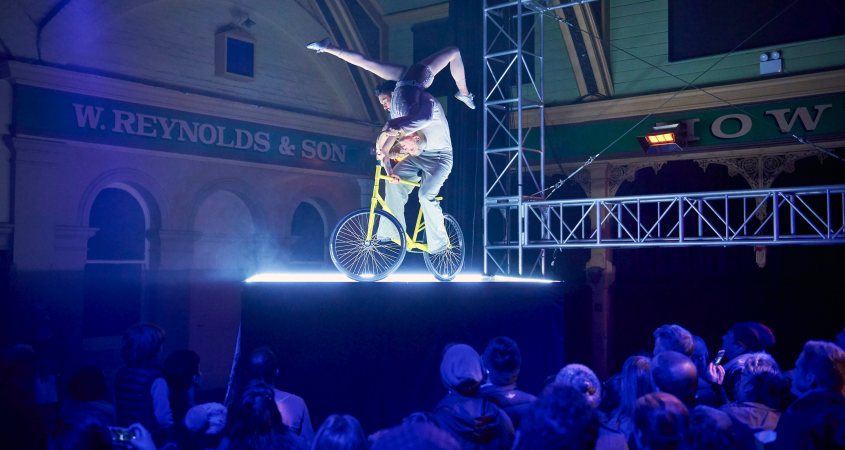 Wunderage, directed by Rob Tannion and Chelsea McGuffin is a collaboration between Circus Oz and Company 2, bringing together elements of acrobatics, music, audience movement and wonder in an exploration of pushing boundaries and strength.

Described by Company 2 director Chelsea McGuffin as “the tightrope between who we are and who we might become”, Wunderage plays with space both vertically and horizontally as circus performers showcase their strength, flexibility, courage and control. While I’m not overly sure whether I understood the ways in which the performance explored the space between who we are and who we might be, I did find myself marvelling at the sheer physicality of the performers. Phoebe Armstrong, Jess McCrindle, Chelsea McGuffin, Dylan Singh, David Trappes, Lachy Shelley and Skip Walker-Milne found themselves precariously balanced on bicycles, platforms and each other. And just in case walking across a tightrope didn’t seem difficult enough, there were headstands, point-shoes and high heels involved as well.

Harriet Oxley’s costumes were amazing and were very reminiscent of what I imagine 1920’s circus costumes to be like in both design and colour, as well as a touch of sparkle where appropriate. The musical accompaniment, provided by Grant Arthur and Bonnie Stewart, was able to strike the perfect yet difficult balance between providing enough atmosphere but not too much as to overpower the circus performance. There were so many different elements to love and as the show went on the tension only built as they performed more and more complex tricks, many of which don’t sound like they should be possible; balancing in a headstand while being pulled across a tightrope for instance.

As the acrobats moved between a variety of tightropes, Chinese Poles, platforms and mini-stages the audience were encouraged to move with them. And this was perhaps the only thing I was, not disappointed in, but perplexed by. Rob Tannion (Circus Oz Artistic Director) had said that part of what they wished to accomplish was the removal of barriers between the performers and the audience, and this is a really interesting premise. But in removing the seating, other physical barriers were created. It was often really difficult to see what was going on, especially when the performers were doing acrobatics on the ground, and this is from me who is reasonably tall and was wearing heels.

Theoretically, the tightrope and platform work should be visible from most vantage points, but there were a number of people up the back scrambling to see, often taken to equipment or standing on chairs to get better vision. I couldn’t help but wonder if you were a child, shorter in stature or someone with a disability how much you would actually be able to see and enjoy. There was a lot of jostling as equipment and people were moved about, and I found this more of a distraction than an opportunity to immerse myself in the show.

For anyone curious about acrobatics, pushing physical boundaries and immersive theatre, Wunderage is a fascinating, if not a little nerve-wracking, exploration of all three.

Wunderage runs until 30 June at Meat Market, North Melbourne. Tickets can be purchased online and by calling the box office on: 1800 710 499.