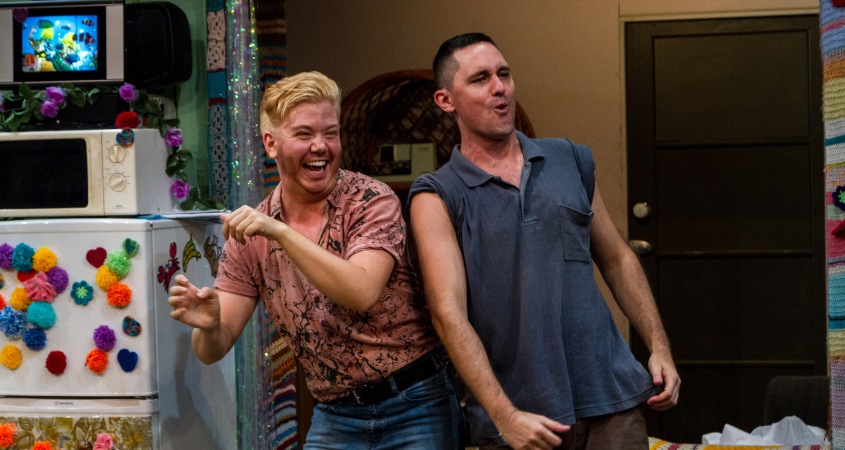 When American playwright and performer, Taylor Mac, headlined Melbourne Festival in 2017 with his 24-hour show A 24-Decade History of Popular Music; Melbourne theatregoers were largely blindsided by the immersive experience, with comparisons being made to that of a completely engrossing religious or spiritual encounter.

It is, therefore, with much anticipation that Melbourne’s own Red Stitch Actors’ Theatre presents the Victorian premiere of Hir, written by Mac in 2015 and part of this year’s Midsumma Festival.

Hir is about a young man returning home from combat in Afghanistan to find that his mother is more dysfunctional than ever while his father has had a disabling stroke and his sister is transitioning from male to female. The play is a beautiful, disturbing and poignant examination of life on the edge and a family trying to evolve in a reluctantly transitioning world.

Characters identifying as transgender are seldom, if ever, seen in live theatre, and it’s hard to imagine that anyone other than Mac could bring to life such a character with as much respectful authenticity.

Harvey Kaska Zielinski is well cast in the role (as Max), and offers a dignified performance with heart and dimension. Jordan Fraser-Trumble as Max’s brother Isaac, and Belinda McClory and Ben Grant as their respective parents all offer solid and engaging performances – at times loving and humorous, and at others; heartbreaking and completely unhinged.

Director Daniel Clarke tackles some sensitive issues with decorum and finesse and does a superb job of finding the light and shade in the complex world of Hir, leaving its viewers pondering thereafter, making this one of Midsumma’s entries not to be missed – and reaffirming why Red Stitch have made such an impact on Melbourne’s theatre scene.

Hir is playing at Red Stitch Actors’ Theatre, 2 Chapel Street, St Kilda until March 4th. Wednesday to Saturdays at 8pm and Sundays at 6:30pm with a 3pm matinee on Saturday February 24th.
Tickets and bookings: https://midsumma.org.au/program/hir18