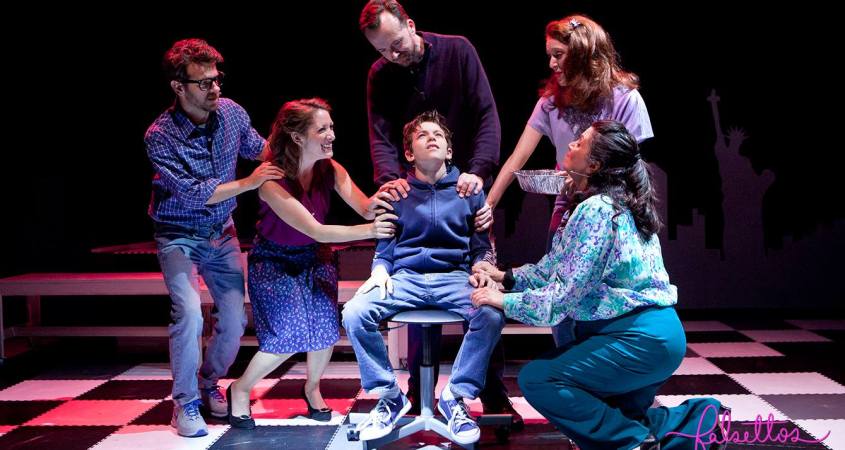 Falsettos presents an honest and often amusing dissection of an atypical family living through ‘70s and ‘80s New York City. The complex score by William Finn winds together the lives of seven people struggling with relationships, family and heartache.

The show is worth a visit for the music alone. Musical Director David Butler has guided the small cast of eight through a score that would give composer Stephen Sondheim a run for his money. I cannot emphasise this enough – the complicated music is executed with beautiful perfection. Lyrics are delivered at the pace of Guns and Ships without a syllable lost, and tear-jerking ballads are handled with love. Treat your ears to unfaltering vocals and note-perfect piano from Butler himself.

Director Tyran Parke has crafted a production filled with honesty and emotion that explores the intersection of morality with love in a disjointed family setting. The natural but playful staging brings laughs and sentiment, and gives the brave characters of this completely sung-through musical space to breathe.

Finn’s score and James Lapine’s book give us quite an antagonistic view of love through couple Marvin and Whizzer, played by Don Winsor and Sam Ward respectively. Winsor’s Marvin struggles with certainty on all fronts – questioning his decisions, circumstances, and sexuality. Ward’s Whizzer (say that ten times fast) is stubborn yet balanced, and dares us to love him. Together the pair explore masculinity and faith in two grounded and moving performances.

Sarah Shahinian’s Trina manages to hold everything together despite disrupted family life. Her flawless and versatile performance includes two highlight numbers – “I’m Breaking Down” and “Holding to the Ground” – which are performed with power and conviction. It’s hard to pull our eyes off Nick Simpson-Deeks as the persistent and self-serving Mendel. Simpson-Deeks brings us an endearing character with warmth, wit, and sublime vocals. The stereotypically troubled psychiatrist comes to life with nuance and affection.

Outsiders-turned-family members Charlotte (Francesca Arena) and Cordelia (Jenni Little) start as the “lesbians from next door” in act two, but quickly become an integral part of this unconventional family. Bright and sweet, the pair bring a much-needed lift in pace to the second act. The role of resilient and lively Jason is shared by Riley Flood and Ben Jason-Easton who alternate throughout the season. The night I attended had Flood, who to be performing at this level at his age is nothing short of phenomenal – with further vocal and stage training, this young performer will go far.

Crisp sound design from Marcello Lo Ricco, simple and colourful lighting from Tom Davies, and era-appropriate costumes from Meredith Cooney help to create the perfect atmosphere for this small show with a big heart.

March along to the quirky and emotional Falsettos, playing a very limited season until February 11th at Chapel Off Chapel.