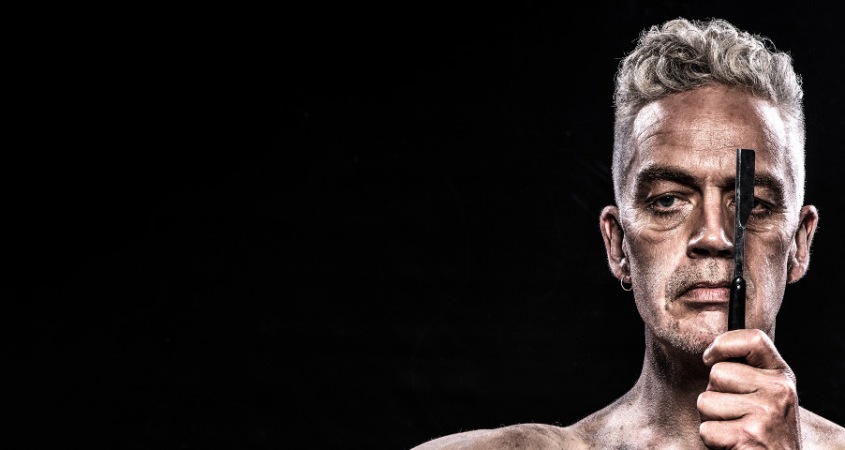 In 1897 England, Oscar Wilde was incarcerated at Reading Gaol for multiple crimes of public indecency. In this prison he wrote De Profundis (a prayer from the depths), a letter to Lord Alfred Douglas, Wilde’s former lover and man whose father is said to have been responsible for his imprisonment. Published in 1905, five years after Wilde’s death, De Profundis survives as an essay of an artist, an autobiographical account, that passes through articulate moods of suffering and meditations on art.

Director David Fenton, whose artistic career spans numerous productions with companies such as Bell Shakespeare and La Boite, has created a production that remains largely loyal to the text. The letter lends itself easily to a monologue, which is exactly how Fenton has adapted it to stage by distilling it to 75 minutes. Fenton’s stripped back style and use of powerful images – the naked body, gushing flowers and overflowing glasses – aided by Ray Pittman’s video design, creates a heightened production with a sensory meaning beyond language.

Dancer, actor and choreographer, Brian Lucas plays Wilde in a charged and affecting performance. His luxurious voice offers Wilde’s words with poise and stamina, and his physical delivery expresses this soul in anguish in a crude and visceral manner. Ray Pittman and Fenton’s stage design features a sterile cell, barren except for a few books and a bench, which emphasises the gritty dimension of Lucas’ performance. The contrast between the lofty, poetic tones of Wilde’s writing and the harsh reality of an isolated body make for a powerful impact.

Despite being a small production, Fenton’s direction with Lucas’s sharp delivery form a total and complete work. They use everything for maximum effect: there are no superfluous moments, no uncertain instances. David Megarrity’s compositions and Brandon Dowery’s lighting are equally direct and contribute to the production’s stark simplicity.

We might think Australia, as the 26th country to achieve marriage equality, shares little with Victorian era England where punishment for ‘gross indecency’ was cellular confinement and forced labour. However, this piece reminds us that the liberty of the body has and continues to be contested within social and political spheres.

It’s rare that a performance remains with me long after I’ve left the theatre, but the sensitivity and ethically demanding nature of this piece lingered for days. So, if you’re unsure which Midsumma show to see and have an expectation to be moved, Oscar Wilde’s De Profundis should be on your list.