Eugène Ionesco was a notable writer in the French avant-garde and absurdist theatre, and a theatre-maker that found art in considering the futility of man. Like many of his contemporaries, Ionesco was the product of a world of wars and ideas. The Chairs is one of Ionesco’s earliest major works, and perhaps the play that depicts humanity’s futility and absurdity at its finest. 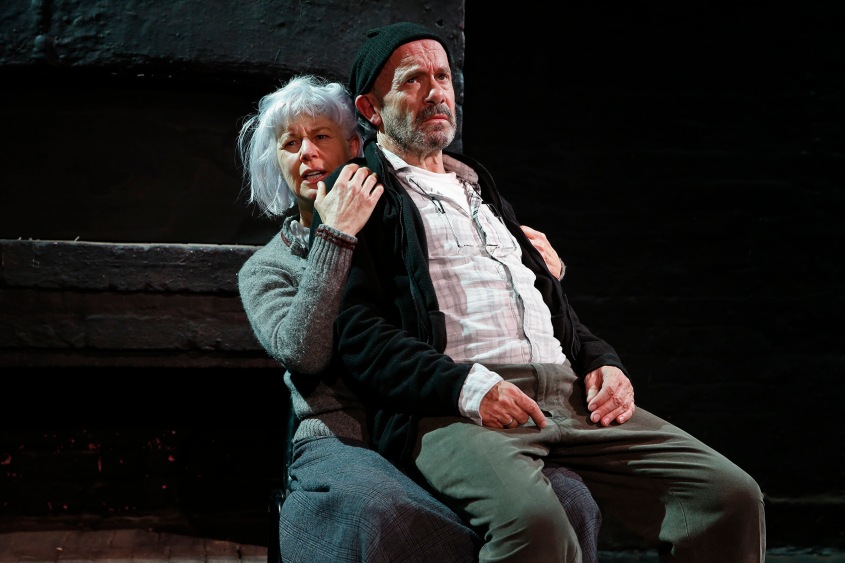 The premise follows an old man and woman, currently isolated from the rest of society, preparing to entertain a hoard of guests for the old man’s message to the world. The sea surrounds the bored pair as they plod through their lives, reliving the excitement of stories already told and vistas already explored. The old woman serves as the vessel from which the man relays his moments of glory (or the moments of glory he could have had), while the old man unsteadily looks upon the world from his ladder, eyeing the boats that pass them in the distance – a promise of life elsewhere. The claustrophobia in Ionesco’s language is palpable – the pauses that linger and the poignant sense that these two characters live within one another and no where else.

The quality of the acting is excellent here: Meldrum and Murray inject so much energy into this production, and we utterly believe their characters’ profound desperation and manic highs and lows. The language of Ionesco is handled with real care and attention to detail; Kemp’s vision is clear and we as an audience feel crowded in by the invisible audience the play brings onto stage, culminating in the greatest chair pile-up I expect La Mama has ever seen.

This production is quite exhausting for the audience, but this was necessary given the content of the play. What starts as hopeful energy becomes devoured by the exasperation of the characters trying to bring their message to life and be seen and valued in their world. The arrival of the Emperor – another invisible force – brings the turning point upon which lives of the old couple have reached completion. There are comic moments in this journey, and there are universal truths about our existence worth contemplating during the course of the play.

Kemp’s The Chairs is impressively successful in mastering what it wants on stage, but whether every audience can patiently journey with the characters of Ionesco’s play is another proverbial ladder to climb altogether.

The Chairs played at La Mama Theatre from 5-15 October, 2017. Visit http://lamama.com.au/ for information about upcoming productions.

Gritty and gripping tales of war

Written by Judith Thompson, Palace of the End is a touching and eye-opening look at war in Iraq and its devastating impact through three monologues that are inspired by real stories of people who have been damaged by the everlasting effects of war.

It’s a unique set design at Theatreworks: the stage is constructed into a narrow ten seat wide performance area, creating an intimate (if not claustrophobic) environment, which allows these monologues to reach us to more dramatic level. Furthermore, each performer is given a designated area where their monologue is to take place with minimal props that are simply but effectively used to create the scene. 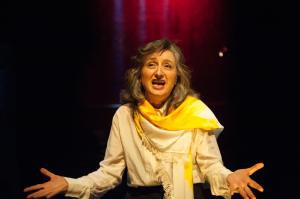 Some interesting direction by Daniel Clarke had the actors on stage from the very beginning, remaining static in their respective environments. Occasional small movements or subtle reactions to what someone else was saying were made thhroughout, reminding us that even though these three people never met, their lives are very much intertwined and affected by this war.

As an audience member, it could be quite difficult to watch three half-hour monologues and remain engaged, but the talented cast are more than able to convincingly draw us into their world. Hannah Norris plays A Soldier, a character inspired by Lynndie England the American soldier who was involved in the abuse of detainees at Abu Ghraib. The unlikeable and redneck soldier shows no remorse for her actions and sees herself as the all-American hero. Following Norris, and showing a distinctly softer and calming perspective is Robert Meldrum as David Kelly, the British weapons inspector who died upon revealing that the weapons of mass destruction were a lie told to justify the invasion in Iraq.

However, it was Eugenia Fragos as Nehrjas Al Saffarh who really imparts to us the horrors of the war. Married to the leader of the Communist Party in Iraq at the time of the Ba’athist Coup, Saffarh’s story of her and her family’s torture is a harrowing tale and Fragos captures the emotion, trauma and pain she experienced and you will find yourself hanging on her every word.

This  production of Thompson’s Palace of the End has taken a sensitive issue and rather than preaching about whether this war is right or wrong allows the stories to speak for themselves. It challenges our notions of right and wrong and demands that in all war we consider exactly what it is we are fighting for.