Witty, self-aware, and with a definite Grimm streak…

A fresh take on an old tale, Bread Crumbs is a funny, yet cruel portrayal of relationships in modern life. Specially selected for this year’s Poppy Seed Festival, this one-hour show that questions the gendered tropes common to fairy tales is self-devised by a team of recent graduates of the Victorian College of the Arts.

Ruby Johnston and Benjamin Nichol, along with a talented production team including set and costume designer Joseph Noonan, sound composer Sidney Millar and lighting designer Rachel Lee, have created this highly-stylised performance that traces the journey of brother and sister Hansel and Gretel in a magical landscape loosely set in Australian surburbia.

In the first scene, the lullaby-like music coupled with picture-book costumes of gaudy colour establishes an innocent tone that sharply contrasts the coarse language of Gretel (Johnston), the girl guide whose use of Australian vernacular hits a mature-audiences-only rating in exceptional style. It’s this stark contrast, between the genre of fairy tale and fantastically black humour that keeps this production fresh and quirky to the final scene.

When Gretel escapes her childhood home by running away with Hansel (Nicole), their only means of returning is the deliberately-left bread crumbs that she knows he will eat. This plot to never return home proves successful. Searching for a prince charming, she wanders in the woods, leading her highly-strung brother on an adventure that leads to a dark reality.

When Gretel enters into a relationship with Prince Charming (Nicole), he’s not quite the man she had in mind. The acting and narrative takes a turn towards realism, and an abusive relationship ensues. It’s here that the performance makes its strongest comment on the darker sides of young ‘love’: domestic violence in the suburbs.

Australian cultural references including quips about hard rubbish, vegemite on crumpets and dreams of a man who drinks Corona instead of Melbourne Bitter inject a load of mature humour into this generally playful fable to keep adult audiences engaged.

The acting is highly physical and vocally rich, creating a hyper-real world bursting with energy. Johnston’s driving performance as the bossy, big sister is outstanding and strong, powering the narrative along. Benjamin transitions with ease from the anxious younger brother to the hipster Prince Charming who uses love as an excuse for violence and abuse.

So what’s the moral of story? Perhaps that for a woman in today’s world to truly be free, she must become the narrator of her own life.

Bread Crumbs runs from the 21st of November until the 2nd of December at The Stables, Meat Market in North Melbourne.

It’s probably rarer now for parents to need to sit down and speak to their children about the birds and the bees. Books such as “Where Did I Come From?” now seem obsolete, and by the time teenagers are learning anything to do with sex education in school, they already seem to know it all. Presented by Riot Stage as part of the Poppy Seed Festival, F. attempts to explore how a group of teenagers come to terms with sex and sexuality as most people of the last decade have – through technology.

Unfortunately the execution is not always successful, as the production’s central concern with how technology is used with sex is at times completely ignored, or does not explore issues raised to any great depths. Thus, one of the main story lines – where two friends enter into a sexual relationship – is surprisingly developed without featuring the use of any social media or technology whatsoever, apart from one scene where the male character refers to the three voicemails he left her. In contrast, a female character’s revelation that an ex-partner has put a naked photo of her on the internet is initially met with mediocre disgust by her friends but is then immediately dropped and never mentioned again – nor do we see any impact this event has upon the character.

Katrina Cornwell‘s direction creates some strong visuals, especially during the musical interludes where all the characters appear on stage at various times before disappearing backstage again. The interesting solipsistic idea that all these characters’ emotions and thoughts belong to one person is best explored here and in the final moments of the show, where sentences begin to flow into one another as two microphones are shared between the cast of twelve.

With a tighter narrative structure and further thoughtful examinations of its characters’ desires and drives, F. could certainly be a piece of theatre with something important to say. But at this stage, investigating the role of the internet when it comes to learning about sex and life is not a new concept, and sadly, F. – in this current production – fails to add anything new to the mix.

“Give me a home among the gum trees, with lots of plum trees…” How the Australian dream has changed since 1974. But has it been for better of for worse? Presented as part of the Poppy Seed Festival, Hotel Now’s What’s Yours Is Mine explores Australian values and ownership of a land that was never ours to own, with an elaborate touch of campness.

The show begins at a reunion for Olympic Games volunteers where three friends – Milly, Ollie and Syd – reconnect and decide to go on a road trip together; Milly has just quit her job, Ollie has a car and Syd just wants to get away from everything. Cue road-trip montage and offbeat adventures as the three friends travel through the country.

The performances from Hayden Burke, Simone French and Tom Halls are full of energy and commitment, and having seen French and Halls in Hotel Now‘s 2016 Melbourne Fringe Festival show, Nothing Special, I found the two continue to share some great chemistry on stage. The direction by Yvonne Virsik is insightful and provoking in the way she chooses to represent and display the ideas raised in show.

What worked brilliantly in Nothing Special was the focus on an aspect of modern culture that was explored to the extreme. Sadly, I feel this doesn’t work as well in What’s Yours Is Mine, as this look at Australian culture is far too broad in scope, and what we end up seeing is a whole lot of ideas, but a disjointed story that is difficult to connect with.

There is a scene where the three characters describe all the “ingredients” needed in explaining what makes ‘Australian culture’, and I couldn’t help wishing the creators had taken their own advice here and been more refined and less haphazard with what they chose to explore and how they choose to do it. As it stands, What’s Yours Is Mine is a pretty performance to look at on the outside, but on the inside I’m afraid it felt a bit of a mess.

When you hear the quote, “Let them eat cake”, you can’t help but think of Marie Antoinette. Interestingly enough, there is no official account of the lady ever having said this, and most facts point to it being almost impossible for the phrase to have been coined by her. Performed as part of the Poppy Seed Festival, LadyCake looks at the life of Marie Antoinette through the eyes of three of her handmaidens and how there is much uncertainty on what is fact and what is fiction when it comes to the last Queen of France.

The three performers, Candace Miles, Madelaine Nunn and Anna Rodway – who also created the story – seem to relish playing the three handmaidens, and to be having real fun in messing with history in such a macabre and ostentatious way. While set in the 18th century, the script includes references to modern innovations – such as the internet – darkly reminding us that despite the centuries, the roles women play in society have not changed that much. This is further highlighted in the scenes where they each play Marie’s disapproving mother Maria Theresa, and the general population who slowly began to turn against the Queen.

Anastasia Poppenburg creates an opulent world in a highly simplistic style with bright pink and green fabrics on display, and luscious trees and plants lining the garden where the handmaidens spend their time gossiping. The eventual downfall of the Queen is signified in a bold and devastating manner and the ensuing final moments of LadyCake shows how idle gossip easily becomes confused with fact while also showing the ludicrous expectations that women have to face in a patriarchal society, both then and now.

Furthermore, Lucy Wilkin‘s garish costumes of large pink froufrou dresses and big blonde poufs perfectly encapsulate the absurd demands these women are meant to adhere to, not only in their service to their Queen, but to society in general.

Three Birds Theatre have come a long way since their 2015 Fringe Festival show, Three Birds One Cock, which looked at the female characters of Alfred Hitchcock’s films. While LadyCake could do with some tightening of the script with scenes that played out too long or just felt unnecessary, there is huge potential for this innovative company to generate a strong reputation for itself and its unique brand of theatre.

The Poppy Seed Festival returns to Melbourne for its second year, opening with Fleur Kilpatrick’s Blessed , a modern retelling of angel Gabriel’s visit to Mary informing her that she is to be the mother of Jesus presented by Attic Erratic. While her previous work, The City They Burned, successfully re-imagined the story of Lot and the fall of Sodom into contemporary times, in this production there is perhaps too much effort in pushing the religious undertones, whereupon I feel the authenticity of what Kilpatrick is attempting to create gets blurred. 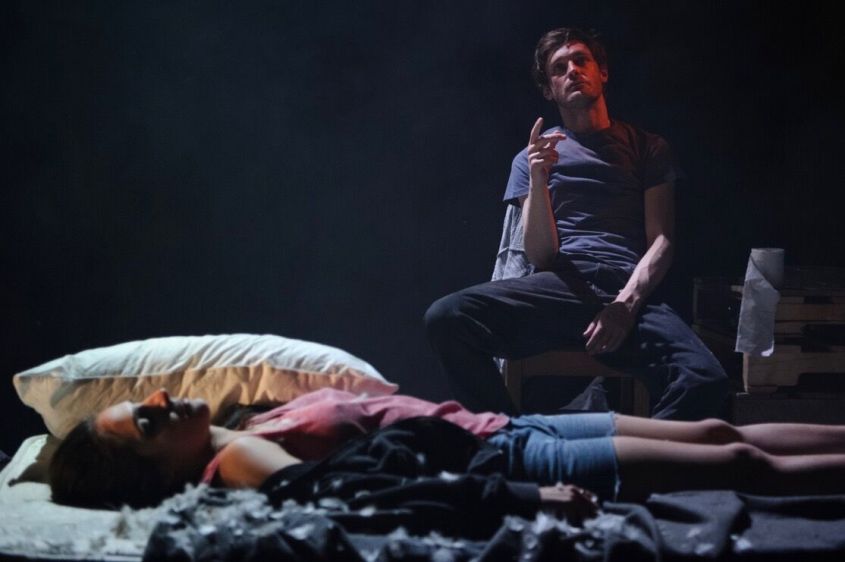 The story follows Maggie and Grey (Olivia Monticciolo and Matt Hickey), who after years of no contact are reunited in Grey’s grimy and shabby home. These are people who are from the lower end of the socio-economic spectrum and living in community housing, who are struggling to make ends meet with low-paying jobs.

While the idea of these two characters being involved with The Annunciation is an interesting exploration of the above issues facing many today, the story never quite gets to making as much as an impact or statement as it should; and for me, if this is a love story, then Hickey and Monticciolo are also unsuccessful in finding it in their characters. While effort has clearly gone into developing Grey and Maggie, the relationship between them doesn’t seem to resonate convincingly on stage and the journey to get to the finale seemed to stagnate at times. Even some adroit direction by Danny Delahunty failed to ignite a spark in the performances or keep the momentum building.

The set design by Luc Favre is a highlight however, and clearly depicts the squalid environment in which Grey and Maggie find themselves in. The unkempt bedroom and the rubbish and clothes strewn across the room are a great visual extension of where Grey has found himself in life.

Kilpatrick may have a deeper message to impart with Blessed in terms of class, love and equality, but unfortunately this production feels as messy as Grey’s bedroom.