Adapted by Patrick Barlow from an original concept by Simon Corble and Nobby Dimon, this beloved British romp is based on the 1935 Hitchcock spy thriller movie and novel by John Buchan. The London’s West End production is currently the longest running comedy. The 39 Steps begins with Richard Hannay, an innocent man, learning too much about a dangerous spy ring and being pursued across Scotland before returning to London to foil the villain’s dastardly plans. 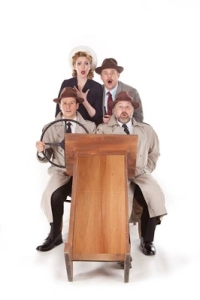 Having previously seen the famous West End production, a few of the memorable comedic moments were missed in this re-staged version, but director Terence O’Connell has made this a fast moving, very funny show with simple, but very effective sets and props by Jacob Battista and with lighting by designer Jason Bovaird.

Costume designer Kim Bishop has produced just the right outfits for the very quick changes needed for the very humorous characters and settings, while choreographer Alana Scanlan has created some very well-rehearsed choreography with great physical and comic timing.

This is indeed a “jolly good show”, and it is unfortunate that there are only 4 final Melbourne performances on this tour.