Bernadette Robinson is a star, and Songs For Nobodies is the perfect vehicle for her endless talent to be showcased in. Originally commissioned and directed by Simon Phillips ten years ago, this one-woman masterpiece allows Robinson to become Judy Garland, Patsy Cline, Billie Holiday, Edith Piaf and Maria Callas in succession, alongside five women who meet these stars in unlikely and often amusingly implausible situations.

She has the audience in the palm of her hand from the very beginning, and we are enthralled with every breath and spellbinding note. Robinson effortlessly switches between her impressive array of accents, dialects and musical styles as she crosses continents and classes, each new voice painting a portrait of a lost artist we feel could be genuinely standing before us. (And it’s the closest we’ll get!) Robinson performs from the heart, her loving recreations mesmerising and enchanting for their truthful purity. We are left astonished with delicate transitions between soprano torch songs, country classics, and smoky blues standards.

The whole experience is very calming and peaceful, a combination of the warm wave of nostalgia intrinsic to the material, and the feeling that we are always safe in Robinson’s expert hands. Sound and lighting designers have embraced this tranquillity, and enhanced every moment with simple but very effective use of soundscapes and flawless lighting states.

The text is written by acclaimed playwright Joanna Murray-Smith, and is imbued with research and passion at every turn. Clear and polished pictures are painted of both the famous artists and the ordinary women recounting their encounters in every monologue, and every carefully selected song is masterfully integrated with the text, creating a tonally consistent flow throughout the entire ninety minute runtime. The show is undoubtedly curated for an audience acquainted with the references, but will still be enjoyed by anyone unfamiliar with these famous artists, thanks to Murray-Smith’s witty and timeless writing.

It is difficult to imagine an artist more suited to their art than Bernadette Robinson in Songs For Nobodies. She is deserving of every piece of praise and acclaim that has come her way throughout the ten-year international performance history of this show – which includes a noteworthy nomination for an Olivier Award during its West End run. Living in the intimate Fairfax Studio at Arts Centre Melbourne until January 5th, this outing makes for the perfect pre-Christmas treat or post-Christmas wind-down. Not to be missed.

The sizzling Jazz-age musical, Chicago, opened at the State Theatre at the Arts Centre in Melbourne last night, satirizing the idea of the celebrity criminal, the corrupt justice system and the media that glamourizes American criminals, and especially, gorgeous female murderesses. Based on a 1926-play written by crime reporter Maurine Dallas Watkins on historical female murderesses who used their feminine wiles to get away with murder, this revival of the 1975 American musical is eerily resonant today in the age of ‘fake news’ where phoney celebrities dominate the headlines and Insta feeds. It was sultry, and full of ‘razzle dazzle’ with some fine moments of comedic timing and satire, and extraordinary talent.

Alinta Chidzey as Velma Kelly brought her outstanding talents in dance and voice to the stage, with vertical leg extensions and a vocal range and power that took my breath away. Having toured alongside Hugh Jackman in The Boy from Oz and winning an impressive collection of awards for Musical Theatre, Chidzey is one to watch. The casting of Casey Donovan as Matron ‘Mama’ Morton was bang-on. The former Australian Idol winner was a powerhouse to behold, owning the space with intensity and adding a sexy physical confidence to the role which was fabulous to see. Natalie Bassingthwaighte brought engaging comedic timing and physicality to the role of Roxie Hart, particularly in the press conference scene where the lawyer, Billy Flynn, played by Jason Donovan, uses her as his ventriloquized dummy to construct a new narrative and re-frame her as innocent. Donovan was slick, charming and humane in his dramatic portrayal of the celebrity lawyer and connected well to the Melbourne audience who welcomed him warmly. The vocals of Jason Donovan and Bassingthwaighte, however, were just not on the same level as Chidzey and Casey Donovan, whose voices filled the vast theatre and were in a league of their own.

Opening on the historic night of Donald Trump’s impeachment, this Chicago production voices a timely and ironic message on the decline of justice and truth in America. Velma comments, “You know, a lot of people have lost faith in America and what America stands for’ and Billy Flynn’s response is to ‘Razzle Dazzle them… How can they see with sequins in their eyes?” A self-aware musical production such as this exposes our collective desire for both glamour and truth. With home-grown stars and a formidable ensemble, you will be entertained on a number of levels by this Australian production of Chicago.

Until 23rd February, tickets at http://www.artscentremelbourne.com.au/whats-on/2019/musicals/chicago

Australian luminary and chanteuse Robyn Archer takes her Melbourne audience through a journey of harsh cityscapes and loving sentiments in Que reste t’il (What Remains?). I suspect the ‘What Remains?’ of her performance is an ode to the love affair we have with French music and how ingrained it has become within our popular culture.

What is so enthralling about Archer’s performance is her engagement with her audience. When an awkward twenty-something seated beside her relatively conservative mother can both burst into song along with the crowd, you know that the conductor of such an experience is of the gifted kind. The crowd is filled with those who have supported Archer for decades, and she certainly knows how to command them with her voice and wit.

Accompanied by Michael Morley on piano, and Paul Butrumlis on accordion, Archer’s music sails through the turbulent times of Paris from the late nineteenth century and as far as the 1970s – even stopping to deliver an outsider’s perspective of the city of lights in Cole Porter’s You Don’t Know Paree. Archer interspersed her songs with stories of the era – a charming education on the history of live performance, with decadent and tragic stories ranged from lesser-known artists to the crowded halls of the Dadaist movement. It is apparent in ‘What Remains?’ that Parisian cabaret was not afraid to regurgitate the city’s own horrors and grime, juxtaposed with the songs concerning quaint longings of love that perch in a higher place above the cityscape.

I found Archer’s ability to weave history through French songs a marvellous form of escapism. My eyes even misted over during a rendition of Marie-Louise Damien’s Pluie: Damien, as Archer explains, was a chanteuse of the Parisian cabaret lesser known than Édith Piaf, but her music was exquisite, as Archer showcases. From Jacques Brel (who’s music dominates the night), Archer takes on some comic short rides with Aristide Bruant’s It Takes Cash, the kitsch delight The Singing Nun’s Dominique and the steamy Serge Gainsbourg/Brigitte Bardot’s Je t’aime. ‘What Remains?’ is such a tasty and eclectic mix of tragi-ballads and humour, where nothing musical of the French variety is left unturned.

The night came to a roaring close with two comic renditions – Alouette where everyone chimed in, and a bastardisation of Piaf’s Non, je ne regrette rien. Archer and her team exited the stage with thundering applause behind them – we really wanted more than an encore.

Francophiles found themselves in a comforting terrain in ‘What Remains?’, and for those remaining, find themselves delightfully haunted by the songs that have pervaded their lives through various mediums over the years.

Traditional and contemporary clash and coalesce

Founded in 1989, the Bangarra Dance Company has been heralded as one of the most important Indigenous performance groups in Australia, and it’s easy to see why with their newest work, Blak.

Blak takes the audience members on a journey of exploration of what it means to be an Indigenous Australian in modern society, with several stories through dance depicting stories of men and women caught in a clash of cultures old and new. 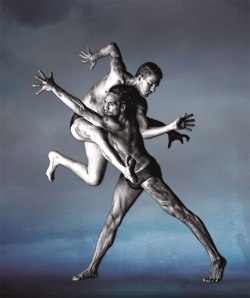 The show opens with seven men in hoodies and skinny jeans- urbanized, disenfranchised and often violent, dancing an urban corroboree caught out of place and time. Through dynamic explosions of movement, we see the men slowly revert from lost inner city boys to men celebrating their traditional culture.

From the men we move to the women- and see a reverse story of women first from the sea, then moving to the village and into modern society  Equally engaging and impassioned, the piece deals with strong and emotive issues of women being silenced in modern society, a mother mourning the difficulties of passing on her culture to her daughters, and the fear of speaking out.

For me, however, the highlight of the performance was the following piece- where we saw men and women come together equally. Barely able to be differentiated from one another, the partner work was beautiful and uplifting. The performance closes with a stunning rain effect, and if the standing ovation of opening night was any indication, the audience was able to connect with the plethora of emotions portrayed by an amazingly talented troupe of dancers.

This is well and truly a contemporary dance show– the basic concepts are communicated clearly, but some of the complexities of the stories being told were not always so clear. However, when dancing is this beautiful, it is easy to just sit back and absorb.

The soundscape by composer David Page is an engaging as the dancing, with deep electronic beats interwoven with a haunting score, sounds of indigenous instruments, and stories told in English, Creole and Language. Costumes were beautifully designed and the onstage costume changes between modern and traditional presentation (including application of body paint) greatly added to the immersion experience.

Blak is playing at the Playhouse, Melbourne Arts Centre, and will then be touring in NSW. See website for more details: www.bangarra.com.au