Shakespeare is reimagined in this marvellously funny production of the Melbourne Shakespeare Company. No one left Brunswick’s Siteworks where the production was held without having cackled with joy. 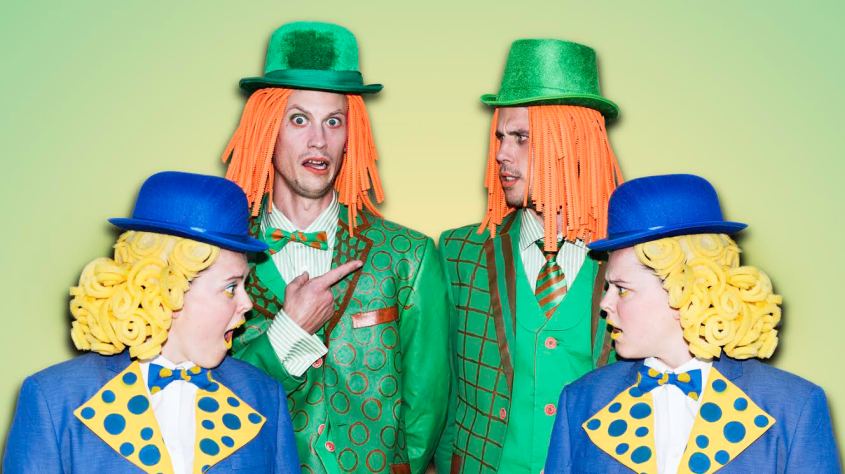 Shakespeare’s comedies are at times something to be endured with gritted smiles at out-dated jokes that haven’t been reined in for their times, but director Jennifer Sarah Dean and assistant director Paul Robertson have masterfully done justice to the work.

The production follows the usual case of mistaken identity of two long-lost twin brothers (Nathaniel Schneider and Jonathan Peck) and their forlorn father (Hunter Perske). Throw in two tumbling manservants (Nicola Bowman and Madeleine Stewart), sisters of differing temperament (Jaqueline Whiting and Lelda Kapsis), a courtesan (Annabelle Tudor), and a magician-esque doctor (Bridget Sweeney), and you have a comedy of seismic proportions.

I rarely get the chance to commend a production for all its elements, but The Comedy of Errors is perfection. The cast delivered with humour and panache in such synchronicity that their talent coupled with the direction of the performance provided an unprecedented professionalism (other companies should take note). Costuming by Rhiannon Irving was unique, colourful and striking. Each cast member donned a wig, which appeared to be put together by some seriously talented arts-and-craft person. A special mention must be made to the costuming of the a capella group (Andrew Isles, Ryan Smedley, Mitch Ralston and Patrick Hill), who sported brightly-coloured stripes and matching beards and lipstick. Irving’s creation was so imaginative and charming, the entrance of each character brought more marvels to admire.

Musical director Ben Adams concocted a mix of delightful old and new-school tunes for the a capella group to perform at opportune moments of the show. At times our quartet would enter from an unsuspecting part of the outdoor setting with a flourish and in unison, that would send the audience into fits of laughter. It was a modern touch that provided plenty of entertainment throughout the show. Further, the choice and use of Siteworks’ outdoor space from varying entrances, exits and positions made for an excellent and surprising use of space. The cast of characters had full use of the performance arena, and as an audience, we would shift our heads in wonder at all the happenings around us.

Overall, I am absolutely thrilled with the choices made in this production at every level. I would happily sit through the performance again and cart out every person I know in what would surely be a lively and enjoyable night.

The Comedy of Errors was performed March 25 – April 2, 2017. For upcoming productions, visit https://www.melbourneshakespeare.com/

Walking in someone else’s stilettos

Written by Theresa Rebeck (creator of TV series Smash) Spike Heels revolves around four people, and the intricate relationships they have with each other. Some are intimate, some are platonic and some are just beginning but – to an extent – they are all based on manipulation, power and lies.

In this production presented by Q44 Theatre Company & Crazy Chair Productions, Nicole Melloy does a flawless job as foul-mouthed Bronx-born Georgie. With the risk of coming across as a frustratingly annoying and unappealing person, Melloy adds hints of fragility and vulnerability to everything she says and does, and ends up creating a character that we can empathise with and like. Anthony Scundi, as Georgie’s best friend Andrew, is also well cast as as the neat, nerdy academic who cannot swear properly.

Georgie and Andrew’s lives are made more complicated by Georgie’s smarmy boss Edward (Michael Robins), and Andrew’s fiancé Lydia (Lelda Kapsis) and even though she has limited stage time, Kapsis creates some genuine touching moments between Lydia and Georgie.

Rebeck’s dialogue is full of fierce one-liners and a good balance of incredibly hilarious moments and incredibly dramatic moments, but it’s her consideration of power and how we all possess and use different forms of it against each other that is especially interesting to see play out on stage and watch how it affects each character.

Despite the brilliant writing, I did take issue with some of the plot points: in particular, the development of the relationship between Georgie and Edward. Without giving too much away, there are two moments that occur that made it difficult for me to accept the outcome of their relationship. It is because of this narrative problem that I feel the character of Edward never quite reaches the level of being a “real” person.

From a technical aspect, the set design by Rebecca Fortuna and Mara Kapsis is perfectly imagined and executed. Apart from having Andrew and Georgie’s personalities reflected in their respective apartments, they each have a large backdrop that the audience’s eye is constantly drawn to, that further builds on that character’s thought and ideals. In the case of Andrew, it’s an image of Nietzsche with the quote ‘sometimes people don’t want to hear the truth because they don’t want their illusions destroyed’, which is an idea resonating throughout Spike Heels.

Spike Heels is a highly enjoyable and intimate look into the complex world of relationships and ultimately the necessity of being true to oneself first and foremost. And tea.