A perfect storm of local talent

The beloved 1950s American musical comedy Singing In The Rain has seamlessly transitioned from the silver screen to Melbourne’s Her Majesty’s Theatre for 2016. Exploring the 1920’s Hollywood film industry’s shift from silent films to the talkies and the challenges a studio faces when one of their biggest draw cards have the voice and personality of a shrill creature from another world, the Gene Kelly hit now features a host of new local stars. 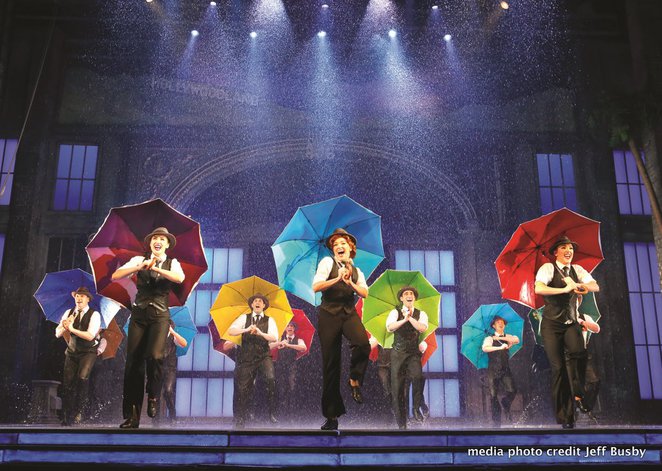 With direction by Jonathan Church, choreography by Andrew Wright and musical direction by Adrian Kirk, this creative team have created a well-polished, colourful and picturesque Australian production of the great American classic. A strong ensemble with excellent diction, slick dance moves and a good energy contributed to the overall high-quality performances throughout the night.

Leading romantics were played by the well-seasoned Adam Garcia and Gretel Scarlett. Garcia fit the part well and seemed to naturally channel the 1920s heartthrob with suave charm, while appealing leading lady Ms Scarlett gave consistently strong vocal performances. Comedic relief was provided by the talented Erika Heynatz, who brilliantly portrayed the incredibly narcissistic and obnoxious beauty Lena Lamont. And last but not least, the 2008 So You Think You Can Dance competition winner Jack Chambers was a standout performer of the evening, consistently demonstrating vast stamina and charisma to make him the perfect sidekick as Cosmo Brown.

Highlight musical numbers included the classic vaudeville-themed song-and-tapdance number “Fit as a Fiddle”, the lyrical tongue-twister “Moses Supposes”, melodically catchy “Make ’em Laugh” and of course, “Singing in the Rain”. The staging of the highly anticipated theme song did not disappoint, replicating the iconic after-hour streets of Hollywood with a literal and spectacular down-pouring of rain soaking the stage and its inhabitants. I particularly enjoyed watching the cast members joyfully splashing in puddles and kicking water onto nearby audience members armed with plastic ponchos.

Singing in the Rain is a classic musical that captures all that is good about the world of traditional musical theatre and has been successfully presented to Australian audiences in a colourful, eye-catching and crisp-sounding production that will be residing in Melbourne until July.

Grease is the word, haven’t you heard? Following a 2013 sell-out season at Her Majesty’s Theatre, the hand-jiving musical is back by popular demand, this time playing at the beautiful Regent Theatre. Bert Newton opened the show as Vince Fontaine with some audience banter which confused my theatre companion, but he was followed by a punchy overture musically directed by Peter Casey and played out by the band of men clad in silk pink shirts. From the moment the music kicks in you can’t help but get excited and dance around, possibly a little too much in your seat.

This production of Grease directed by David Gilmore was one of the most enjoyable and high-energy musicals I have seen in a long time. Rob Mills and the relatively unknown Gretel Scarlett have returned to the stage as the Rydell High heart-throbs Danny and Sandy. They were pitch perfect throughout the entire night, and slipped into the teen roles perfectly.  The show was sleek and well-polished, and the cast really nailed their parts (however if I’m going to nitpick, it probably wouldn’t hurt the ensemble to brush up on their American accents.)  I did feel the only performers who really had to work that little harder to hit those highs were the famous Aussie icons themselves, including John Paul Young, Todd McKenney and Newton himself. But don’t get me wrong: the audience was overjoyed to see these guys do their thing – they could have spoken their songs, and the opening night crowd would still have been thrilled.

The lighting was crisp, bright and replete with red LED strips and Elvis images that framed the show all evening. Fluro-pink love hearts flew in and out, adding to the 1950’s feel of the show as designed by Terry Parsons, and accompanied by the occasional pings of colour from the hanging mirror balls. The show seamlessly transitioned through all the scenes, and had a really quick pace across the evening. The famous hit songs such as “Greased Lightning” and “Summer Loving”, staged and choreographed by Arlene Phillips, were satisfyingly well-done, and I literally had to stop myself from singing along.

It was a thoroughly enjoyable night’s entertainment, and no matter how many times you may have seen the movie, I promise you won’t be disappointed seeing this musical live on stage.

Grease is playing at The Regent Theatre until January 25, 2015. Tickets start from $60.

Australian music theatre composer Matthew Lee Robinson, after the acclaimed concert production of his musical Atlantis earlier this year, returned to Chapel Off Chapel with the presentation of his original work Happy People, a behind-the-scenes examination of the world of children’s entertainment.

The titular group, ‘Happy People’, are a Hi-5/Wiggles-style collective of children’s entertainers who, after ten years working together, are falling apart. Bobby (Bobby Fox) and Sunny (Sun Park), formerly married and recently divorced, are conflicted over residual bitterness and Bobby’s self destructive tendencies. Flamboyant Jewish boy Benny (Tom Sharah) seeks to re-invent himself as a member of a boy band pop star. Jeff (Bert Labonté), the elephant-suited mascot of the group, wants nothing more than to move to his recently-bought new home and settle down with the fifth member of the group, Sally (Gretel Scarlett) – a bright bouncy blonde with the sugary sweetness and rigidity of a Stepford housewife.

The show as a whole is fantastic – Robinson, doing double duty as composer and librettist, crafts hilarious sendups of songs that seemed almost ripped from a real-life children’s TV show, as well as some emotional ballads and duets that throb with the complexities and heartaches of adulthood, alongside well-crafted scenes that had the audience in tears from laughter.

In the cast, there are no weak points – even from behind music stands and carrying books, they delivered fully committed and individuated performances. Scarlett as the manically cheerful Sally shows off some fantastic comedic chops, as well as her stunning voice of both range and power. Sharah as Benny comes close to stealing the show with every line, and his song ‘Boyband’ is a comedic and physical tour de force of every 90’s boyband stereotype. Robyn Arthur in the small but crucial role of the band’s manager Poppy brought a solid and earthy maturity to the part, as well as a rafter-shaking belt in the touching penultimate song ‘Young’.

Happy People stands as a strong work from an established Australian composer, and is great evidence of the vibrancy and originality of the emerging Australian musical scene.

The premiere of Happy People in Concert took place at Chapel off Chapel, 12 Little Chapel St, Prahran on the 18 – 19th October, 2014.

After an impromptu greeting by the ensemble cast of Gordon Frost’s Grease led by Principal Lynch (Val Lehman) welcoming us to the halls of Rydell High School, the lights go down and a brief love duet between romantic leads Sandy (Gretel Scarlett) and Danny (Rob Mills) leads into the electrifying opening ‘Grease is the Word’. 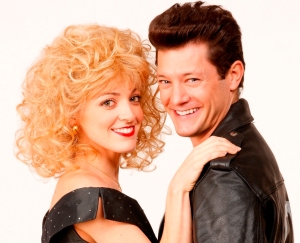 The cast emerges from the smoke, each character instantly distinguishable in the tight and precise ensemble, and all is right with the world. ‘Grease is the Word’ is exciting, characterful and taps immediately into the hot-blooded vivacity of 50’s youth culture.

What is so disappointing is that very little that follows matches the opening number. The classic score is still fantastic, under the musical direction of Stephen Amos, but the energy in both the musical numbers and scenes never reaches the level it should be at. (Act I song ‘These Magic Changes’ led by Chris Durling as Doody comes the closest to achieving the strength of the first number).

Scarlett and Mills are perfectly believable as the lead couple. Mills uses his cheeky charm to good effect as bad boy Danny, and Scarlet gives off an aura of sunny innocence as Sandy, and shows off a surprising range in her number ‘Hopelessly Devoted to You’. Danny’s gang, the T-Birds, tend to blur together with their similar hair colours and identical outfits, although Duane McGregor as Roger does get to display some impressive vocals in his duet ‘Mooning’ with Jan (Laura Murphy). Stephen Mahy as Kenickie is oddly restrained to the point of being underpowered, displaying the rock stylings necessary for the biggest number in the show ‘Greased Lightning’ but none of the rock star sexual charisma.

The female characters as a whole fare better. Lucy Maunder as Rizzo is the highlight of the entire show, grabbing attention as soon as she struts out in her dark sunglasses and by the end delivers a commanding performance of ‘There Are Worse Things I Could Do’. The first-rate ensemble are to be commended for performing with complete energy and commitment in everything they appear in, with special mention to ensemble member Euan Doidge for the onstage acrobatics he pulls off at various points in the show.