Presented as part of the 2016 Midsumma Festival by Fairly Lucid Productions and directed by Casey Gould, Ben Noble‘s play Member was incited by the death of gay man Scott Johnson in 1988 when his body was found at the bottom of a cliff at Manly. Deemed a suicide, there has always been speculation that he was a victim of a gay hate-crime. However, this narrative focuses on Corey, your typical Aussie living in Manly with his wife and child. We follow Corey through various moments in his life that have led to where he is now: in a hospital room with his son lying unconscious, seemingly fighting for his life. 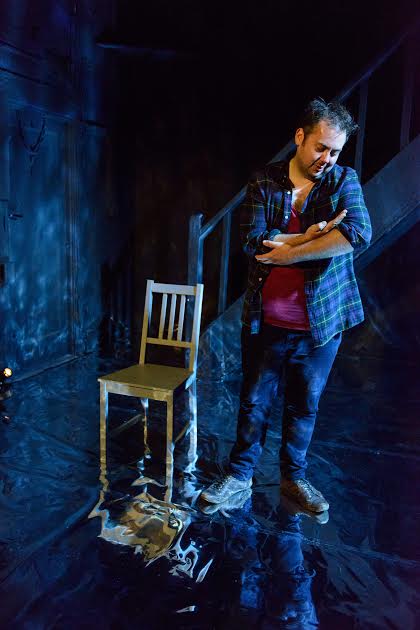 Ben Noble is exemplary in his performance as Corey (and all the other characters he plays). From the very beginning, our eyes are glued on him and even as he begins to unravel and the truth becomes clearer, we still cannot look away. Corey is a complex character but Noble is able to bring some insight into his actions and thoughts while still holding him accountable for them.

There are some very difficult moments to watch in the show: not because of what’s happening on stage, but because of what’s happening in our head. Noble is so convincing with his delivery of the dialogue and the characters he creates that it is impossible to not begin visualising what is being described. You see the fear in the eyes of the victims with every insult slurred, you hear the moment when foot connects with rib, and you can almost feel the blood splatter from every strike to the face.

The lighting design by Lisa Mibus hones in on the intensity of the events and despite the empty space bar for a single chair, builds well on creating a claustrophobic environment. Jacob Battista‘s stage design that covering the entire floor in one sheet of silver gloss works perfectly in bringing more depth to the work. The watery mirrored surface not only captures Noble reflecting on his own behaviour and past, but also ensures the audience reflect on the community we live in and acknowledge that these things have happened and continue to happen.

Despite its set time period, Member could easily be describing topical events from current times with homophobic attacks on people of the GLBTIQ community still occurring when you consider that only last week a gay man was bashed in St Kilda Royal Botanical Gardens, and stickers were placed along Chapel St stating “Cure AIDS, Kick a Poofter to Death”.

Member is an important story that needs to be told. It’s important because it reminds us that no matter how far we have come as a community and as a society, we still have so much further to go before people such as Scott Johnson can feel safe in their community and in their homes. With a completely sold-out run, here’s hoping this show gets a second season some time soon.

Member was performed between 19 – 30 January at La Mama Theatre