Watching Animal is a rare theatrical experience. It has such a visceral effect on you that you are left shaken and feeling extremely vulnerable and angry as you walk out. Created by Susie Dee, Kate Sherman and Nicci Wilks, it is an exploration of domestic violence and how women are meant to react in a world where violence against women and male brutishness are celebrated – and it is as gritty as physical theatre can be. 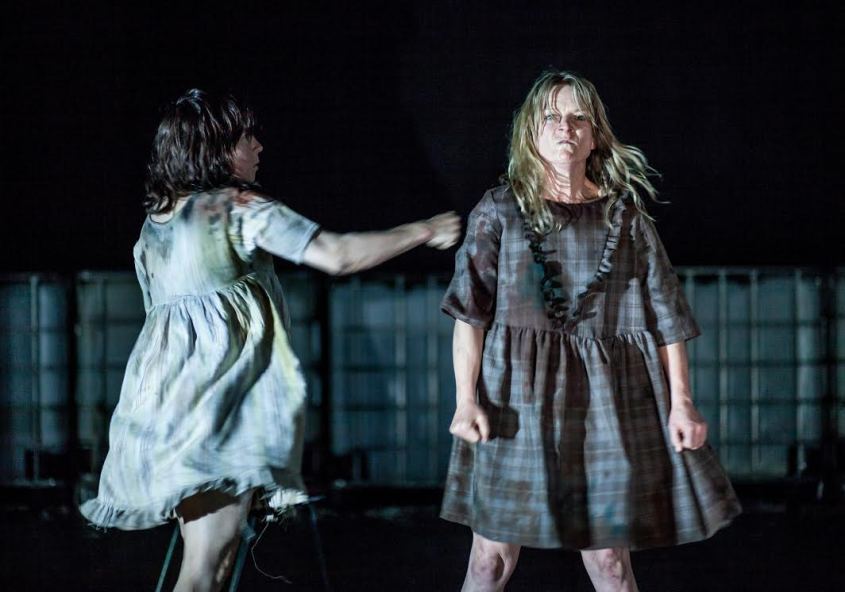 The stage design by Marg Horwell feels like a large shipping container; dark, cold and empty except for a number of small square cages. The two sisters climb and crawl over them, the whole time emoting that they are also caged, desperately looking for a way out. The tattered netting that covers the roof can be seen as protection from the outside, but with the many holes in it, it is only a matter of time before it is destroyed.

Composer Kelly Ryall builds a suffocating and unsympathetic environment from the opening moments of the show, and is relentless in drawing you into the sisters’ world. There are moments in Animal where you feel like you need to look away as the horror unfolds, but even if you do (which you shouldn’t), the sounds are so vivid that they create the visuals for you regardless. There is one moment particular, where along with Andy Turner‘s lighting design, the shadows that form along the walls and menacingly envelops the two sisters involves some nail-biting tension and panic.

All these elements work meticulously together to support the two performers on stage. Sherman and Wilks show strong commitment, strength and stamina in their challenging roles. The duality (and also the blending) of playful sisters who depend on and support each other to hyper-aggressive fighters has a complexity that the two are able to authentically create on stage. The need to swap between these “characters” in seconds is not only a physical demand on their bodies but also an emotional and psychological one.

As with SHIT and The Long Pigs, Dee’s direction allows for moments that make us laugh, surprise us, and haunt us. With a show like Animal, pacing is extremely important and Dee ensures that there are adequate breaks between the truly dark moments of the show, so that by the time we reach the powerful conclusion we are completely engaged with the piece.
While there is no dialogue in Animal, it speaks volumes regarding the immense impact domestic violence and violence against women has on women: the violence that they experience and also the violence that it breeds. Compelling, gruelling and masterful work by Influx Theatre, Animal is raw theatre at its finest.

Originally commissioned for French theatre company Tabula Rasa, the English-language premiere of Dreamers presented by fortyfivedownstairs could easily be a narrative born straight out of current Australian politics and newspapers. The story follows a young Muslim refugee, Majid, who seeks work and acceptance from a community that eyes him with suspicion, disdain and aggression. 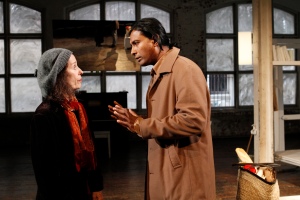 Majid (the impressive Yomal Rajasinghe) is waiting for the bus where he meets the lonely and much older Anne (Helen Morse). Through a second chance encounter their friendship deepens into a romantic relationship, much to the outrage of the town’s residents.

Daniel Keene’s story is a slow-burn but utterly absorbing tale of a world of casual bigotry and racial discrimination, where at one point, a resident ranks Majid’s “darkness” on a scale of 1 to 10. The scenes involving the various townspeople (Nicholas Bell, Jonathan Taylor, Paul English, Natasha Herbert and Marco Chiappi) whilst uncomfortable to watch and hear, are a stark reminder of the attitudes that are still held by many in Australia.

Age-discrimination, poverty and gender roles are also explored in Dreamers, but with Keene’s infusion of light-hearted or comedic moments and interludes, he never makes you feel overwhelmed by the issues but allows them to enter your thoughts and rest there.

There is some inspiring work by designer Adrienne Chisholm, lighting designer Andy Turner and sound designer Sam Bolton. All these facets blend in so smoothly with the story, and serve to deepen the impact and authenticity of the production.

The talented cast of eight are highly convincing without becoming caricatures or stereotypes. Under the masterful direction of Ariette Taylor, they create some truly affecting moments, especially as we build towards the conclusion, which allows us to leave the performance buoyed up with some hope.

Dreamers is a perfect example of strong writing, acting, and directing coming together to create a highly memorable theatrical experience for its audience. Hopefully it will not be over another decade before Keene and Taylor collaborate once more.

Firstly, if you have a fear of clowns, then this show is probably not for you but it doesn’t mean you still shouldn’t go see it. The clowns in The Long Pigs are not your traditional-looking clowns (for the most part).

These guys are dirty and dark with black noses, and are hell-bent on collecting the red noses of other clowns…

The uncanny ability that performers Clare Bartholomew, Nicci Wilks and Derek Ives (who along with director Susie Dee, also devised the show) have to use something as small as a facial expression or taking a step to make their audience get actual stitches from laughing is testament to their darkly funny skills as clowns.

Even with minimal dialogue and the unsettling atmosphere, the cast are able to both convey a strong story and evoke sympathy and empathy from us over their individual and group plights. In fact there are some very suspenseful moments interspersed throughout The Long Pigs which form a great contrast to the more ‘traditional’ clowning that occurs.

All the stage elements blend perfectly in the performance to help create this grim world that is thrust upon us – especially Jethro Woodward’s excellent sound design and composition, as the constant changes from cheery to eerie amplified all the action that was going on on stage.

So even if you do have that fear of clowns (or coulrophobia), The Long Pigs is a show that still needs to be seen. Even though it’s only March, I can confidently say that this is going to be one of my highlight shows of the year, because how often can you simultaneously be completely entertained and utterly creeped out by the one show?

This may make for a boring review of Patricia Cornelius’ Savages at fortyfive downstairs as I really couldn’t fault it. The acting, writing, lighting, sound and blocking were flawless, not to mention the grave subject matter that left the audience truly affected.

Savages centres around four late-thirty-something/early-forty-something men on the boys’ trip of a lifetime aboard a cruise. George, Runt, Rabbit and Craze discuss their failed relationships, unfulfilling jobs, fragmented childhoods and for those with kids, their struggles raising them. There’s a lot that’s implied but not outright said: Runt was beaten by his father; George is seeing Craze’s ex-wife; not to mention the ambiguous and utterly frightening ending.

Through the choreography, we see the impact that competition among mates can have: comparing scars, running races, the exhilaration of brawling. Savages explores themes of modern masculinity, fatherhood, love, sex and violence, tapping into notions of pack mentality, the phenomenon of “nice guys”, domestic and intimate partner abuse and drug-facilitated date rape.

Said intimations of date rape occur in the cruise nightclub, which is created with only the use of thumping bass and strobe lights by sound engineer Kelly Ryall and lighting technician Andy Turner, respectively, evoking the breathless, menacing machismo that the club experience can so often be.

The acting by Lyall Brooks (George), Luke Elliot (Runt), James O’Connell (Rabbit) and Mark Tregonning (Craze) was exceptional, and the juxtapositioning of the redeeming qualities of “nice guys” – loving their mothers, kids, women in general – with the misogynistic underbelly these characters possess is a truly haunting representation of modern manhood that, for some men, isn’t necessarily inaccurate.

The use of the slanted, exposed floorboards to construct the stage really conjures not only the cruise ship (not to mention the continued use of water metaphors – drowning, rebirth) but the hierarchy of mateship, with Runt on the bottom and (arguably) Craze at the helm.

One thing I did find a bit disconcerting at first was the “highly rhythmic, poetic” dialogue, and the only actor whose portrayal I couldn’t 100% connect with was O’Connell’s, but I put that down to nerves, perhaps.

At once a funny, sad, pitiful, scary and altogether realistic portrayal of modern masculinity – and the inherent “savage” misogyny that sometimes goes with it – in all its glory.

* contains some nudity and disturbing content, and employs the use of strobe lights.

Savages is on at fortyfive downstairs until 8th September Tuesday to Friday at 7:30pm, Saturdays at 5pm and 8pm and Sundays at 5pm. Tickets $45 full, $37.50 concession.