It’s Monday night at an almost empty, seedy Bronx bar in the mid-80s, and five 32-year-olds are not quite sure where their lives are heading, or even what exactly it is they want. What they do know, is that they want change, excitement and passion, and they want it now. Savage in Limbo by acclaimed playwright John Patrick Shanley offers a comedic yet honest look at hope, dreams and missed opportunities. 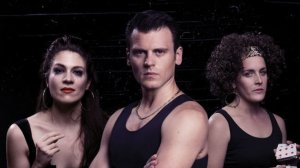 Sarah Nicolazzo is the shining star of this production as Linda Rotunda, the local girl that all the men know. Her boyfriend has just announced to her he wants to see ugly girls and she is just a little distraught. Nicolazzo delivers a brilliant performance and the excellent physicality and subtle facial expressions she uses to portray Linda are highly natural.

Samantha Mesh as the title character, Denise Savage, convincingly displays the pent-up frustration over where Denise’s life has led. She is still living with her mother, single and unhappy. Something has to give and she’s decided that it’s going to be her virginity, and possibly to Linda’s boyfriend. Nicolazzo and Mesh are highly entertaining to watch, and bounce off each others’ charisma well in their equally strong performances.

Anthony Scundi as the boyfriend, Tony Aronica, plays the role with a level of macho naivety that actually has us disliking him much less than we ought to. Rounding out the talented cast, in supporting roles but still with plenty to say, were Kostas Ilias as Murk the bartender and Andrea McCannon as April, the alcoholic ex-nun.

The design of the bar interior was well thought-out, however I would have liked to have seen a bit more flair and colour with the costumes, especially given the period we were in. Having all five people dressed in black (apart from the Murk’s shirt) wasn’t always visually arresting. Thankfully this didn’t affect the show much due to Gabriella Rose-Carter‘s direction in keeping the characters moving and active with each other. Apart from getting great performances from the cast, she also managed to keep them interesting when they were listening to each other, which I particularly noticed during the Santa Claus scene.

Being thirty-two, I have found myself having similar thoughts to and experiencing life-moments like these characters. Even though it’s been over 30 years since Savage in Limbo was written, it’s somewhat comforting to know that some things never change. Or maybe it should be unsettling? Either way, Q44 Theatre have made a commendable production that burrows into your mind for you to ponder over after the final bow has taken place.

Delving into the darkness

Quills might be Mockingbird Theatre’s most ambitious production to date. It’s their eighth show in two years and the first to be staged at North Melbourne’s Meat Market Pavilion.

Quills is about the Marquis de Sade’s last days and the discovery that even while incarcerated he has been writing 1200 page tomes depicting all things pornographic, sadistic and vile. The Marquis is stripped of his quills and paper in order to be silenced, yet finds other clever and twisted ways to maintain his mind’s workings until eventually he is stripped of everything else from limb to head. 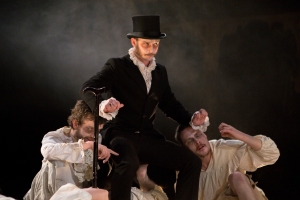 Written by Doug Wright, the play sits somewhere between witty, unsettling, grotesque, political and shameful. Its success lies in the suggestion that the Marquis’ censors are the real criminals: far more insane and twisted than the Marquis himself. It’s a big bite for even the longest standing companies to chew, with its three-hour duration, non-stop dialogue and heavy array of social issues, and although the usually savvy Mockingbird Theatre and director Chris Baldock succeed on some levels, the production sadly falls short on others.

While the Meat Market Pavilion is a genius choice for the old lunatic asylum with its stark, wide-open spaces and shadowy corners perfectly lit to reflect such an environment, the scenes (with seating organised in traverse) are spread too far apart, making some dialogue difficult to hear and some scenes difficult to see with full impact.

The supporting cast of asylum inmates create some great atmosphere despite being distracting at times: however, it is for the main players to bear the bigger issues. Adam Ward’s performance as Dr Royer-Collard is so theatrically heightened as to be better suited to a caricature pantomime or circus ringmaster, whereupon every second line is shouted ad nauseam. Fortunately Andrea McCannon as Renee Pelagie and Dylan Watson as Abbe de Coulmier keep things grounded with their fine and believable portrayals.

It is Adrian Carr, however, who plays the Marquis, with the greatest weight on his shoulders. It’s a brave role for anyone to attempt: a daring, witty, controversial sexual deviant and naked for half the show. Throughout Act One, Carr comes across as more irritating than sinister with no signs of much-needed light and dark shading, yet by Act Two he proves he has a handle on the complex and multifaceted character of the Marquis, and delivers some chilling moments indeed.

As usual, the quality Mockingbird stamp can be seen overall in Quills: it’s just a shame that the questionable areas were significantly felt.

Quills is playing now from August 5 – 15 at 8pm and Sunday August 10 at 5pm at the Meat Market Pavilion, 5 Blackwood street, North Melbourne. Tickets at http://www.mockingbirdtheatre.com.au/