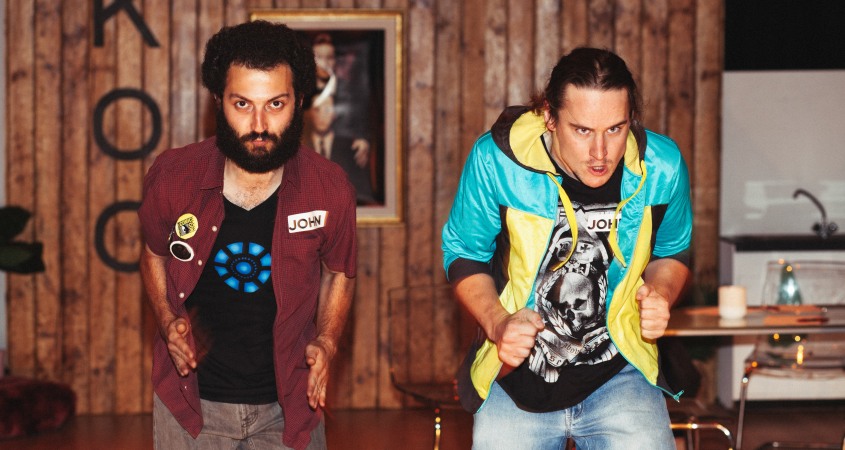 Get hired or get fired (at)

The latest black comedy from Baker’s Dozen Theatre Company riffs on the relentless job-hunting struggle facing 5.3% of Australians today. So desperate are six jobless hopefuls that working as a hired killer for professional assassination syndicate KOC (Killing On Command) is deemed a legitimate possibility. The Hitmen depicts a group-job-interview-cum-survival-of-the-fittest for these six employees, where only one will prevail with both the job and their life.

Writer Mish Wittrup and director Blake Barnard have created a world of unadulterated absurdity, where regular social constructs are often demolished or ignored, and we see normal people become wild animals ala Battle Royale. The pressure-cooker setting mixed with classic “only one can survive” setup is a strong premise which ensures the exposition is, for the most part, pleasantly swift and snappy. Wittrup craftily weaves individual backstories and motivations for most characters into the narrative with asides and soliloquys spattered throughout, which immediately makes each ‘John’ far more fascinating once we know why they’re there.

These six Johns (giving real names leads to execution) portray rising desperation with feverish realism, allowing the many moments of violence to feel deserved and authentic. Two audience favourites are undoubtedly Eidann Glover and Raymond Martini, who both give dedicated and extremely humorous performances. Glover finds comedic flare in her character’s unwavering unlikability but also genuine warmth in her affection for partner John (Harry Borland), and Martini plays the gamer nerd out of his depth to perfection. Cazz Bainbridge as tyrannical head honcho Gwendoline sometimes moves too fast through moments of potential comedic gold, but successfully creates a dominating and minacious persona who is always one step ahead of the game.

Amidst characters’ wavering integrity and blood splatters galore is a subversive and gratifying (but extremely dark) comedy, with meaningful comments about the societal juncture desperate job seekers face in contemporary Australia – what lengths may some go to just for a paycheque? Though tempting, can we live with an unethical choice? It is the abandonment of solidarity when in the face of disparity that these corrupt individuals barely question as they undergo the world’s most erratic and stressful job interview that provokes many fascinating questions, and may also force you to consider how strong your own moral compass would be were you in this environment. When it’s a world of every man for himself, is it possible to unify against our unethical leaders? Or, as Wittrup and co perhaps suggest, do we willingly accept our fate and the sniper’s headshot.