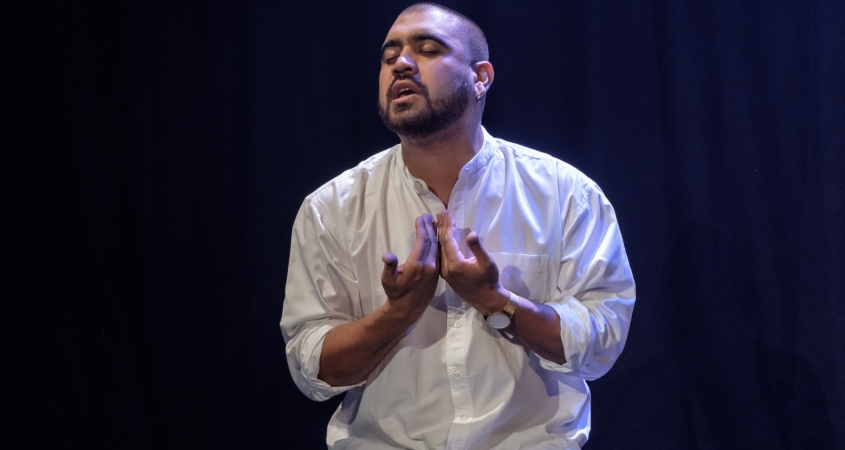 Theatre making and storytelling at its simple best

Using nothing but words, an empty stage and some very simple lighting, wordsmith Omar Musa has concocted a beautiful and chaotic cacophony of language that inspires, amuses, and shocks with Since Ali Died. Musa is a master conductor of words, and this symphony reflects his passion for these art-forms – poetry and rap.

Using “the death of his hero Muhammad Ali as a lyrical springboard”, Musa launches into story after story, tackling love, loss, and divinity – and we are enthralled for the entire duration. There were many moments throughout the hour-long performance you could hear a pin drop. Musa is scathingly honest as he presents reflections on his life as a “brown man growing up on black land”, enduring episodes at primary school where he was told his “skin is the colour of shit”, and recounting encounters with racist politicians (inspiring the rap piece ‘Un-Australia’), tumultuous past loves, and perhaps his worst enemy, personal demons. There are insightful personal descriptions as he defines (and defies) wrestling with identity, and the expectations that stem from heritage and masculinity.

As this compelling performer rhymes and riffs, any notions of poetry being a boring and antiquated requirement confined to the high school classroom are demolished – every word is riveting and current, the atmosphere in the audience alive with anticipation. But it’s more than his gritty eloquence as a poet that makes the work so engaging; Musa is a storyteller who is charming and relaxed no matter the topic, always comfortable presenting his work mostly alone onstage, with the exception of guest performer Sarah Corry alongside for two pieces.

Fully deserving of the standing ovation he received at the end of the performance, Since Ali Died is a cutting and contemporary lyrical refraction of Musa’s powerful perspective on Australia and humanity. It’s a reminder of how powerful language can be, and a wake-up call to habitual Australian ignorance.

Don’t miss this intimate and intelligent work, playing a very short season at Arts Centre Melbourne until August 17th, as part of the third year of their ‘Big World, Up Close’ series. Tickets: https://www.artscentremelbourne.com.au/whats-on/2019/festivals-and-series/big-world-up-close/since-ali-died