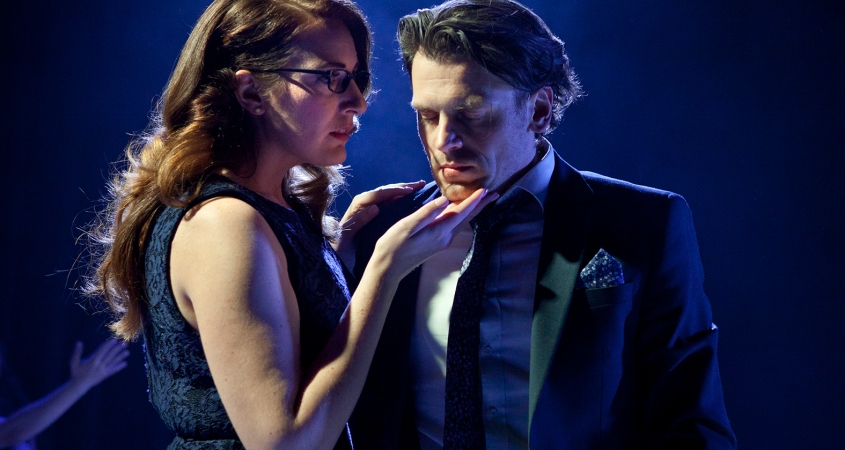 StageArt present yet another rarely performed musical masterpiece with Nine: The Musical which explores the dozens of exhausted mental catacombs belonging to the arrogant, tortured and “genius” filmmaker Guido Contini. As he endures a mid-life crisis approaching his fortieth birthday, his emotional and sexual frustrations obstruct his usual creative liberty.

At first, it is difficult to understand what relevancy Nine has in 2018 – it is a show revolving around a man worshipped by women and who in turn often objectifies and mistreats them. Lines such as “there are only two kinds of women in the world – wives and whores” could easily be taken with offence in today’s socio-political climate, which must be considered when re-mounting any piece of art from the past. But despite Guido’s ego, it is ultimately his mental health that is explored in Nine, making a welcome contribution to the all-too silent public conversation surrounding this. And any production that can display the talents of sixteen women as strong as those in Nine must be welcomed to the stage.

And if there are two elements to surely praise in this production, one is unquestionably the talented female cast and the second is the music of Maury Yeston. In the opening song, Guido is literally swallowed by a sea of long hair and elegant cocktail dresses: jaw-dropping for the sheer number of powerful women who command both our and Guido’s attention. It’s a hypnotic effect, and their constant presence throughout the rest of the show builds to an overwhelmingly beautiful cacophony in key moments.

Clear standouts from this incredibly strong ensemble are Rachel Bronca as seductress Carla, the phenomenal Bronte Florian as Saraghina (who truly shines in her scene with young Guido and in Be Italian), and Stephanie John as fast-talking, intimidating Stephanie. All three deliver sensational, captivating performances.

Anthony Scundi delivers a strong performance as Guido Contini, but noticeably struggles with his vocals – perhaps reflecting a strained voice following weeks of intensive rehearsals. Scundi’s stage presence successfully delivers Guido’s delusion as he dips between fantasy and the real world and his increasing madness in indecision – creatively, emotionally and sexually.

Director and choreographer Michael Ralph ensures this madness manifests at every opportunity. He has created a world where the lines between fantasy and reality are skilfully blurred, exacerbating Guido’s confusion and descent into mania. Ralph’s choreography is sublime, ranging from angelic obsession in Overture Delle Donne, to disrupted delicacy in The Grand Canal, and to dirty, sharp, cathartic movement in showstopper Be Italian. The open, transformable set by Ralph and Tom Willis accompanied by gorgeous lighting from Willis breed an inviting atmosphere where anything is possible, and indeed at any point we could be inside Guido’s daydream, nightmare, or real-life torment. Dazzling costuming from Meredith Cooney complete this unbridled visual nirvana of dreams and possibility.

Alana Tranter as loyal, dependable wife Luisa evokes our pity but warms our hearts in Be on Your Own, and a special mention must be given to Kershawn Theodore as Young Guido (alternated by Brierley Smith) who hits every move and note with sharp precision – he has a bright theatre career ahead of him.

The score by Maury Yeston is rich, sophisticated and powerful. In every song, the orchestra, led by musical director Nathan Firmin with AMD Peter Pham Nguyen, is utterly stellar, capturing every emotion from the original 26-piece orchestration with only eight staggeringly talented musicians – but you’d think it was many more from the full and textured sound they produce. Near perfection in sound design from Marcello Lo Ricco delivers crisp and clean vocals with a beautifully balanced band.

Based on Fellini’s semi-autobiographical film 8 ½, Nine is best described as Company meets Follies meets Loving Repeating, with a dash of Passion and Cabaret – and notably won the Tony Awards for Best Musical and Best Original Score for the original 1982 Broadway production. If you’ve seen the 2009 film adaptation, you absolutely haven’t seen the stage show – they are barely cousins let alone siblings (the stage show is far superior).

Nine delivers fast-paced, dark material with an extremely talented cast, addressing creative pressure and the power of female influence. As with all StageArt presentations, Nine is not a show you’re likely to see again anytime soon in Melbourne – and certainly not in such an intimate, intricate production.

NINE The Musical is being performed 12 October -13 November at Chapel Off Chapel. Tickets can be purchased online and by calling the box office on 03 8290 7000.