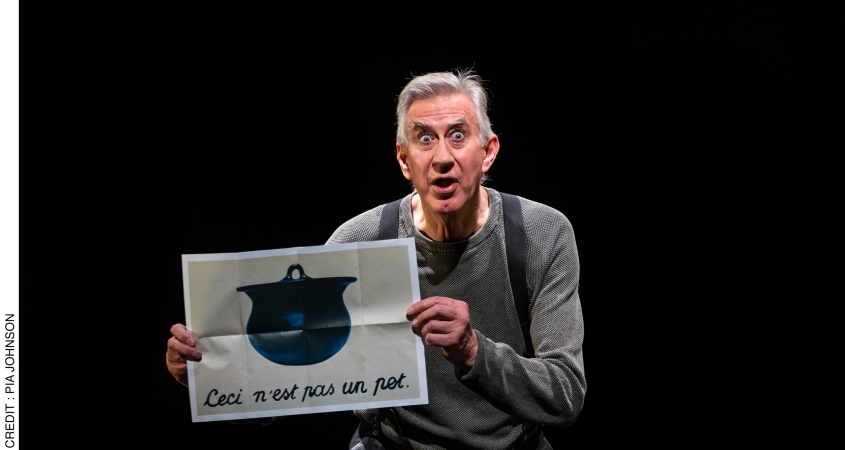 Deadpan humour and storytelling in adaptation of Beckett’s Watt

It’s 1942, and France is occupied by Germany. Samuel Beckett is on the run from Nazis. Throughout this grim reality, Beckett wrote a novel titled Watt, describing the journey of the titular character to, and within, the house of Mr Knott. Renowned Irish actor Barry McGovern has adapted this novel for the stage, delivering a powerhouse one man show that pays the perfect homage to Beckett and one of his most fascinating characters.

McGovern is the ultimate storyteller. He manages to keep the audience drawn into the world of Watt for the entire hour, despite some parts being particularly dry and wordy. Credit must also, of course, be given to director Tom Creed for allowing McGovern to realise the beauty in such an absurd world.

McGovern’s deadpan approach to the absurdity of Watt’s experiences was the cause of immense (and regular) laughter. McGovern’s ability to allow the audience to feel empathy for characters he was not even playing was incredibly special, an ability rarely seen amongst most performers. This was a testament to McGovern’s own intelligence and experience as a theatre maker.

The set was simply, yet effectively realised by Sinéad Mckenna, a bare concrete wall in the foreground providing context to the drab and dreary existences Watt witnesses in Mr Knott’s house. A wooden chair and trolley are also on stage at the immediate and useful disposal of McGovern. An equally simple yet, effective lighting design was also implemented by Mckenna.

This is a show that could have very easily been boring and lost amongst audiences. There is a lot of dialogue, drawn out and confusing. There is not a lot of action to keep audiences entertained. Yet, McGovern and Creed have proved that the art of simple storytelling has not been lost. Watt is a stunning, entertaining piece that is a joy to experience.

Watt is being performed 4 – 13 October at the Playhouse, Arts Centre Melbourne as part of the Melbourne International Arts Festival. Tickets can be purchased online and by calling the box office on 1300 182 183.