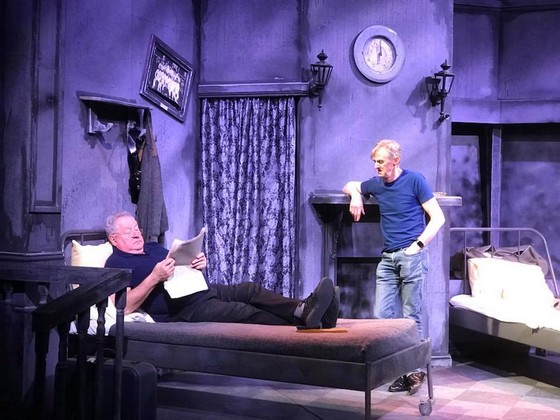 Two men waiting for another man, killing time with circular conversations and inane activities – sound familiar? Harold Pinter’s The Dumb Waiter was undoubtedly inspired by Beckett’s Waiting for Godot, but the occupation and character of these two men raises the stakes to a new level. It’s engrossing and fascinating to watch people discussing ordinary subjects, and it’s that underlying and undiscussed reality that builds tension. To say more would be giving too much away, but this comedy/drama explores a breakdown of communication in a way that only absurdist theatre can.

Director Paul Watson has given Pinter’s 1950s play a very faithful reproduction, noting that “staging directions are very deliberate and precise from Pinter and we’ve honoured that closely”. Watson has crafted a world of impatience and intrigue, with every increasingly heated exchange between Ben and Gus playing on our minds without a single dull moment.

John Wood brings subdued menace to the role of Ben. A seasoned and admired actor, the gravitas of Wood contributes a lion’s share of intensity to this dramatic pressure cooker. Does he suspect what we suspect? The calm, apathetic demeanour of Ben is juxtaposed by the irritability of Gus (played by Don Bridges), which sinks into our skin. As his patience wears thin, his craving for information becomes obsessive.

Lighting by Jason Bovaird is simple but powerful, breathing life into the highly detailed and realistic set by Michael Watson. Together, Watson’s set and Bovaird’s lighting extend the world of the play far beyond what we see onstage, adding depth and possibility to the intimate Chapel.

It’s Reservoir Dogs meets Waiting for Godot in this absurd but intense basement, where the power of information shapes men. Authority is defined by who knows the most, and the trickle-down nature of information in this world deems who the loser will be.

Seeing The Dumb Waiter professionally performed is rare, and this production would make Pinter proud.

The Dumb Waiter runs at Chapel Off Chapel until 9 September. Tickets can be purchased online and by calling the box office on 03 8290 7000.