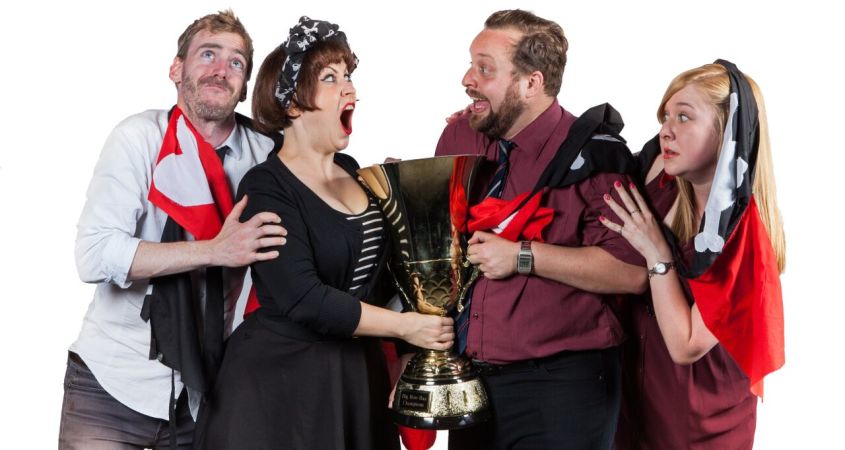 The Big HOO-HAA! returns to the Comedy Festival with a duel of dazzling wit.

What’s been running every Friday night for 8 years and is still new to the stage every time? It’s The Big HOO-HAA!, Melbourne’s long-standing comedy improvisation battle where the audience’s suggestions prompt two teams of comics to a duel of dazzling wit and spontaneous songs. Usually at home on stage at the Butterfly Club, The Big HOO-HAA! brings a rotating cast of performers to Melbourne Town Hall for opening night mayhem at the Melbourne International Comedy Festival.

This show, (and I saw the late one at 11 pm), was an energetic blast of good-time feels coming at us hard. The format is designed to pit wits and courage of two comic teams, the Hearts and the Bones, against each other, mediated by a Master of Ceremonies/umpire, and fuelled by the suggestions of the audience. The feeling in the room was warm and creative and the MC, last night played by Dan Debuf, created an atmosphere where the audience was part of the magic and never a target.

In a series of competitive comedy challenges and games, each team put their heart and wits on the line and the audience voted for a winner. There was spontaneous song-writing, scenes that were re-done in different eras, a Charades-inspired challenge of guess-three-things-about-my-perfect-lover, and a pun-infused round of one-liners with instant death elimination. Not every offer was a winner last night, but it was good for the soul to see the performers laying it out there and there were far more laughs than groans from the Hearts and Bones.

Last night, an entire musical about cheesecake arose from an audience suggestion, and the chorus from Louisa Fitzhardinge’s spontaneous ballad of ‘I’m a Milky Girl’ is still playing in my brain. Sophie Kneebone was also a standout; I particularly liked her Scottish brogue that emerged in a Russian communist party scene and her decision to embrace it. Caleb Garfinkel on guitar was a treat to listen to and set a range of musical moods at the audience’s request.

The rules of improvisation were made clear on stage: accept any offer made, commit to your choices even if they lead you to bizarre places and help out your fellow actor wherever you can. This is undoubtedly what led to the outing of an unusual love affair between Milky Ma (Brianna Williams) and her favourite talking cow, Bessie, (Luke Ryan) which will never happen again. Such is the ‘once upon a time’ quality of The Big HOO-HAA! For clever, rapid-fire comedy that makes you feel part of the winning team, head to The Big HOO-HAA! You’ll be glad you did.

The Big HOO-HAA! plays at Melbourne Town Hall until 21 April.  Tickets can be purchased online and by calling the box office on 03 9245 3788.

Rebecca Waese is an Honorary Associate at La Trobe University in the Department of Creative Arts and English.