Sidesault Festival kicked off with a roaring double bill on Wednesday the 8th of November. This experimental circus festival presented by Circus Oz is showcasing emerging and established circus artists in the wondrous Melba Speigeltent and features a range of independant artists from Melbourne and beyond. Casting Off by Australian troupe, A Good Catch and Unsuitable by Tumble Circus from Belfast certainly delivered the goods on the opening night. 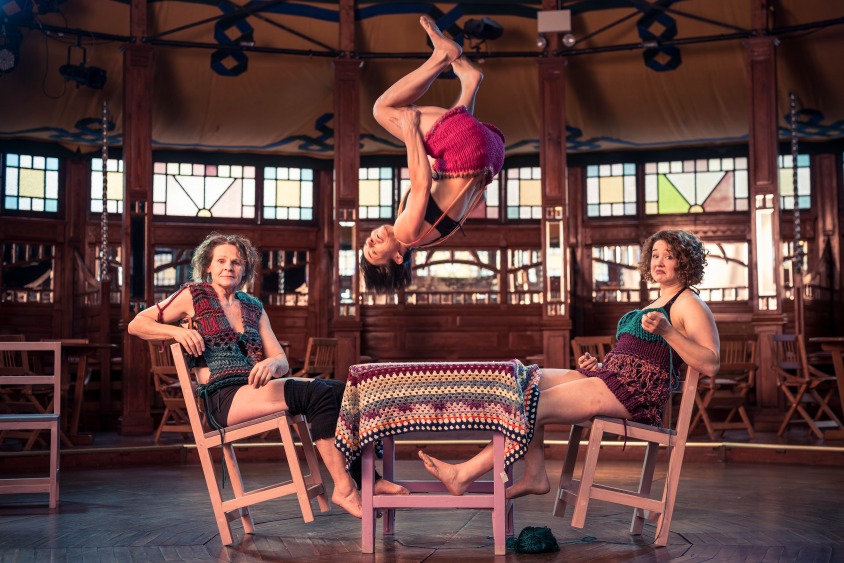 Casting Off commenced with three performers sitting under a table all the while deliberating how to start their own show. These candid clowns soon took their audience on a ride as absurd as it was touching. The dialogue was fresh, carrying the show along with popping originality. The acrobatics, fast-paced and true to the Australian circus tradition, were pleasingly raw and rough around the edges.

Performers Debra Batton, Sharon Gruenert and Spenser Inwood clearly have a bond that only years of training circus could provide. Debra’s one-liners, planned or improvised were goldmines of laughter. She dropped pearls of nonsensical wisdom, including forgetting what the meaning of life was on top of a three-chair stack. Gruenert threw firey tantrums that could outdo a toddler amidst her air-piercing acrobatics. Finally, the charming Spenser Inwood effortlessly executed an aerial cradle routine, throwing and catching Sharon while jazz scat-singing melodiously.

Casting Off was relaxed, personal and fantastically inappropriate. Not surprising to see these Circus Oz performers pushing their art to new places here in Melbourne.

The ambiance of the Melba Spiegeltent is like no other venue. It’s a space whose magic has been collecting like dust since it was made in Belgium in 1910. The second show on the bill, Unsuitable reflected the facets of this mirrored tent well with its revue-type show consisting of a series of individual acts.

Unsuitable by Tumble Circus premiered at Sidesault Festival, and to say it was welcomed warmly would be an understatement. This full-length show commenced with a short vignette of three mischevieous clowns who liked to kick each others’ butts to psychtrance.

Ken Fanning, Tina Segner and Angelique Ross demonstrated their talent in a series of individual and group acts. All our favourite apparatus took the stage: trapeze, tissue, hula hoops and even a group juggling act with all performers in spangled leotards, platforms and blonde wigs.

Highlights include Tina’s tissue routine performed in motorcycle helmet, Angelique’s poetic tightwire act that told the story of a trip on the metro and featured some edible props, and Ken’s clowning act that proves the art of buffooning is very much alive. He really had the audience in the palm of his hand, eliciting high-pitched cackles with ease.

Sharp, edgy and hilarious: Tumble Circus’s Unsuitable is guaranteed to keep you engaged and laughing.

Supported by the City of Yarra and presented by Circus Oz, Sidesault Festival runs from the 8th to the 18th and is not to be missed. For tickets and more information: http://www.circusoz.com/the-spiegeltent/shows-at-the-melba.html