Superb production of an hilarious classic

It’s been 34 years since playwright Michael Frayn penned his farcical comedy Noises Off and I have patiently waited decades to see this production on the stage. As part of its 2017 season, Melbourne Theatre Company has fulfilled my wish and the production does not disappoint with this wild and witty play-within-a-play. 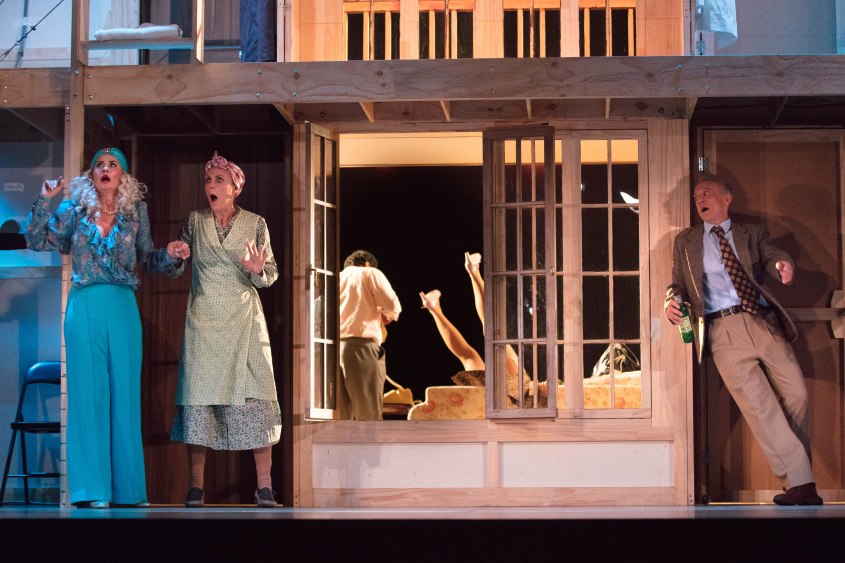 While this is a fast-paced farce, one of the strengths of Frayn’s script is that we are still provided with time to get to know the characters and understand the relationships between them all. Once these are established, the laughs begin to build until the absurd and ridiculous circumstances the cast get themselves into hit peak hilarity. The second act where we are privy to the goings on behind the scenes offers the most entertaining moments of the show, as the actors struggle to separate the drama of their personal lives with the drama happening on stage.

The hugely talented ensemble of this production deliver superb performances and there is an energetic chemistry between them all. Ray Chong Nee as the pompous Gary has brilliant timing and literally throws himself into his character. As one of the more “straight” characters, Nicki Wendt as Belinda still captures our attention in all her scenes. Louise Siversen as Dotty is sensational and fully embraces the wackiness of both characters she plays.

Meanwhile, Libby Munro as Brooke is delightful to watch as the actor who will not go off script no matter what, as is Hugh Parker as the sensitive but consummate thespian Freddie. Steven Tandy as Selsdon is great comedy relief as he exasperates the cast with his tendency for drinking on the job.

Simon Burke as Lloyd the director of sex farce Nothing On – the play-within-a-play – finds a serenity and calm in the character who yet simultaneously speaks through gritted teeth to his frustratingly inept cast. James Saunders and Emily Goddard as stage managers Tim and Poppy bring some hilarious moments as they try to keep everything on track despite the mishaps along the way.

Sam Strong’s attentive and considerate direction in the real world ensures that despite all the relationships being portrayed (in Noises Off and Nothing On), we never feel overwhelmed or confused by what we are seeing. While there are moments that seem to stretch themselves for laughs, such as the axe-fight scene and watching each actor constantly sneak across backstage to avoid being spotted by the audience, he manages to keep those laughs consistent and plentiful.

Set designer Richard Roberts has done a truly marvelous job in creating the two-storey interior of the Brents’ house as well as the backstage area. The detailing in both, particularly the backstage area, is well thought-out and the rotating stage is highly impressive and used effectively.

While Nothing On is an absolute shambles of a show (but one I would still like to see), Noises Off is a slick production of the (in)famous play with a cast and creative team that has clearly put in much effort and thought into its creation. Melbourne Theatre Company presents a guaranteed crowd-pleaser with this, and rightfully so.