In 2011, Japan was hit by its most powerful earthquake ever recorded. With a magnitude of 9.0 – 9.1, it triggered a huge tsunami and resulted in the deaths of over 16,000 people and left thousands more injured. Referred to as “The Great East Japan Earthquake” it was a devastating blow for Japan, with sympathies and aide coming from around the world. 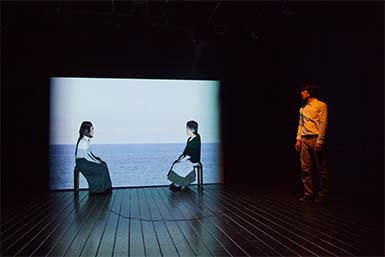 In Kagerou – Study of Translating Performance, director Shun Hamanaka uses the story of Kyoko Takagi – a woman in her 70s who lost her husband in the tsunami – and attempts to explore how sympathy and connection between strangers can be born from a tragedy such as this. Hamanaka has opted for a minimal set design, having just three chairs on stage with video footage being projected onto a screen with some effective shadow work by lighting designer Hiroshi Isaka, emphasising the documentary-style of the performance.

Actor Yoko Ito appears dressed in black with headphones on, and we hear a muffled voice speaking Japanese. Once this voice – Kyoko – finishes speaking, Ito begins to relay what she has said in English and the act of translating begins to be explored. Ito is not only translating what Kyoko is saying, but also the grief, sorrow and hope felt from a woman in a small port town in Japan all the way to a theatre audience in inner-city Melbourne.

Ito intentionally remains disconnected and detached when speaking, allowing the words of Kyoko’s to resonate with us and allow us to begin to gather an understanding of what she has gone through. However as she walks around the space, her body language begins to display a simultaneous representation of fragility and determination from Kyoko’s story.

Hamanaka succeeds in drawing sympathy from the audience through Ito’s “performance” as Kyoko, repeating the survivor’s words and keeping her own natural pauses and nuances. However, the video footage itself – while initially striking and offering a lens into understanding Kyoko’s town – becomes distant and alienating at times, pushing you further out of the story and hindering the opportunity to build on the connection with Kyoko and her experience.

Ultimately the achievement of Kagerou – Study of Translating Performance is in acknowledging that we can still share in the grief  and relate to the loss and devastation felt by the people of the The Great East Japan Earthquake – that sympathy can indeed translate.