The title says it all really. Presented by Out Cast Theatre for a limited return season, Distinguished Gentlemen (But Really Just A Couple of ***ts) is a riotous look at two dirty old Regency gentlemen who lust after a mysterious young stranger. The two scheme their way to not only one-up each other, but also to ensnare the stranger into their bedroom, however they’re not the only ones with a trick or two up their… sleeve. 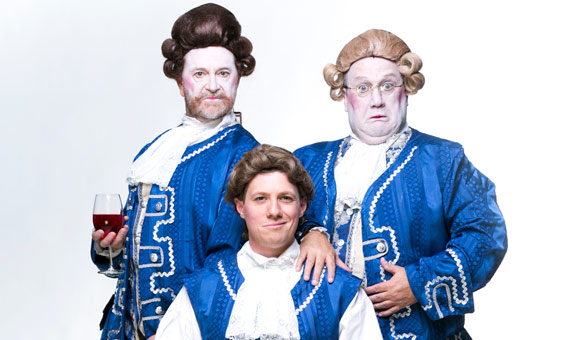 Steven Dawson and Wayne Pearn as Sir George Barrington and Lord Henry Burridge are clearly having a lot of fun with their characters, who are well established with enough backstory and motivation to make them satisfying and almost believable, apart from the sheer absurdity of the story. Tosh Greenslade as Simon Latimer, the attractive young man, rounds out the trio and does well in maintaining Simon as the “straight” role and ensuring the narrative pushes forward. While I can see how a sense of mystery to his character is required, a few hints and teases here and there might have allowed him to be as well fleshed out a character as Sir Barrington and Lord Burridge were.

Dawson also serves as writer and director of Distinguished Gentlemen and while keeping with the language of the period, manages to squeeze in more sexual innuendos and puns than you could poke a stick at. The jokes might be lewd and the humour crude, but they are entertaining and for the most part, unexpected and refreshing. The story is a little rough around the edges and could do with some – er – tightening, but again, its outrageousness and salaciousness are what make this farcical piece of theatre a delight to watch as the three men go head-to-head (so to speak) to get what they desire.

At its core Distinguished Gentlemen (But Really Just A Couple of ***ts) is a sordid tale about power, lust and revenge but with a dollop of buffoonery and plenty of buggery. These distinguished gentlemen may be a couple of ***ts, but they are a couple of funny ***ts in a show that will definitely have you feeling a little hot under the collar – from laugher.