I still remember the excitement in my house when we signed up for dial-up Internet. It brought a new world into my living room with just a tap of the keyboard and a click of the mouse. Seventeen years later, the technological advances we have made have brought this virtual world closer to us, but has it pushed us further away from the real world? Presented as part of the 2016 Midsumma Festival, Christopher Bryant’s Intoxication raises questions about how our reliance on social media, dating apps and smart phones are hindering us from building honest and meaningful relationships with actual people. 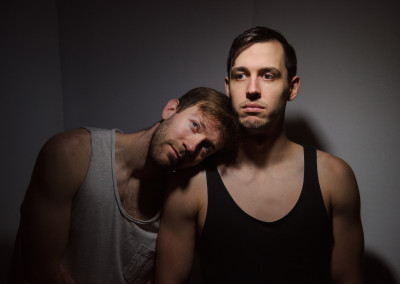 The three performers – Ryan Forbes, Amy Hack and Bryant – each sit on an individual cube and, as if they are in a confessional, share their anxieties with us. Even though there is barely, if any, interaction between the three during these moments, the thoughts and emotions shared are very similar, building on Bryant’s idea that despite all having these tangible insecurities and feelings of loneliness, we seem to drive ourselves further away from reality and into the digital world, where we are free to project the life we wish we had and want the world (wide web) to see.

Forbes, Hack and Bryant are engaging on stage and the interactions they do share have a nice authenticity to them. Despite having similar concerns and worries about being alone and falling in love, they each bring individuality to their characters and stay committed to them the whole time.

Bryant is a talented and thoughtful writer and I would love to be able to read the script to Intoxication so I could fully comprehend everything that he has to say. Every line uttered has importance and carries much weight, however the delivery is so fast and non-stop that when you take a second to contemplate what is being said, you’ve already missed the next two lines of dialogue and find yourself trying to keep up with the performers. There are a few musical interludes to help even out the pace but they feel slightly out of place in their current execution.

Intoxication has many home truths it puts forth to the audience, and I found myself agreeing countless times and seeing myself in the thoughts and emotions expressed by characters. However, allowing the audience to reflect on these thoughts during the show, as well as after, would create stronger emotional connections between the viewers and these characters, and thus produce an even stronger impact from the production overall.