Here’s what Barbra keeps in her basement…

As the house lights dimmed inside the Fairfax Theatre at the Arts Centre, I leaned over to my mother and whispered, ‘I don’t know anything about Barbra Streisand.’ This remains true, but I am now certainly informed about her basement. As Alex (Ash Flanders) recounts his fictional employment in Barbra Streisand’s basement shopping mall it was thrilling to revel in the affection that playwright Jonathan Tolins clearly has for the superstar singer. The play was warm, heartfelt and gregarious in all the right ways. 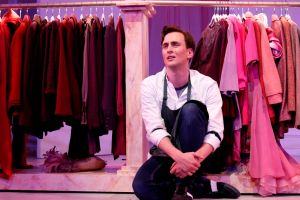 The play opens with Ash giving a brief introduction to the audience about the book that inspired the play (My Passion for Design by Barbra Streisand) and about how Streisand built a shopping mall in the basement of her Malibu home. Ash then becomes Alex and tells the wickedly funny story of how he moved from Disneyland to Streisand, and how Alex’s relationship with his boyfriend Barry is affected by the new job. It’s a true one-man show, and Flanders did a spectacular job of moving seamlessly between the characters with their idiosyncratic accents and mannerisms. As I stated before, I don’t know anything about Barbra Streisand, but Flanders’ impression of her softly lilting voice and affected mannerisms were outrageously funny.

For the most part the play had me in stitches, however, there were several LA references that went completely over my head and it seemed, much of the rest of audience’s as well. This has nothing to do with the delivery, just that the play was written about a particular place with which a local audience is not necessarily familiar. The saturation of American culture certainly helped contextualise the jokes, but specific references to freeways were always going to go over most of our heads. (I would love to see if something similar could be written about Melbourne; maybe Geoffrey Rush has a Pirates of the Caribbean set up in his garage, I don’t know.)

There is clearly so much passion and fondness for Streisand in the script; director Gary Abrahams has ensured the barbs (pardon the pun) are handled just right – carefully toeing that difficult line between gently mocking and barbarous (I’m sorry I can’t stop). Adam Gardnir simply and effectively designed the sets and costumes; while Rachel Burke’s lighting design was beautiful. For a play about such a massively successful musician, there wasn’t much music, however The Sweats’ composition and sound design carefully adorned and enhanced the performance. Finally, Flanders’ numerous accents were so accurate, that it would be deeply remiss not to mention voice and dialogue coach Suzanne Heywood who has clearly done a marvellous job.

It can make me wary when it looks like the cast and crew of a production have had lots of fun assembling and crafting their work, but in this case it was really joyous to see. Buyer and Cellar demonstrates how reverence can work well alongside gentle teasing, especially if the butt of your jokes is a multimillionaire who really does have a shopping mall in her basement.

Buyer and Cellar is showing at the Fairfax Theatre at the Arts Centre until 12 December. Tickets from: http://www.mtc.com.au/plays-and-tickets/mainstage-2015/buyer-and-cellar/