Double monologue was a hit with delighted audience

We start in the living room of Leslie. He is an old man, or perhaps he just seems older than he is because of his lingering cold, awful breathy wheeze and the difficulty he has at getting around. But he wouldn’t complain, instead, he’d welcome you in for a cuppa and a natter. Though don’t expect to get a word in! 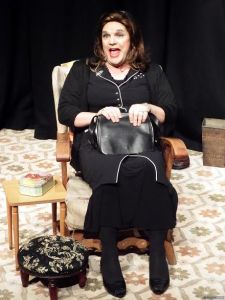 Michael Dalton is Leslie, who tells us about his life; his mother, only recently passed away, his sister and brother who’ve migrated to Australia and Canada respectively, and ‘Our Maureen’, the evil sister who lives around the corner. We’ve all met a Leslie – welcoming and friendly, but bitter and full of anger and regret.

His home is sweet – old, furniture that is clearly well-loved, trinkets to fill an op shop, and a real sense of cosy. The set welcomes the audience as much as Leslie does. Throughout, the lighting subtly directs our eye across the stage, but also creates a real melancholy when required.

In the second half we meet Maureen (again played by Michael Dalton). We’ve come to expect a real piece of work from Leslie’s description, and there is certainly a sense of that. Similarly to Leslie, she is bitter, but perhaps slightly more aware of the world around her – though possibly equally as deluded about her place in it.

Michael Dalton plays both characters with the black humour, yet genuine sadness that playwright Jimmy Chinn requires from his words. Dalton and director Zoe Warwick have created two distinct yet clearly interwoven characters that connect instantly with the audience.

And did I mention that it is funny? The play carries a lot of emotional weight, but the audience with whom I enjoyed the performance roared with laughter many times during the show. The show is part of the Victorian Seniors Festival this year: festival participants were well-represented in an audience who clearly loved this show as particularly suited to them.

A Different Way Home is being presented by the community partner annecto and the City of Stonnington as part of the Victorian Seniors Festival 2015.