A shipping container stands, raised on stilts, above a desolate patch of dirt. A man carrying a naked woman slowly descends the staircase and places her on the ground, and is joined by two other figures who all partially undress and take grotesque poses. Industrial sounds fill the space, but are gradually joined by a lone woman singing. The audience is transfixed. 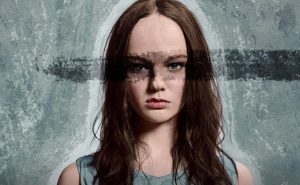 Director Adena Jacobs has taken the ancient play by Sophocles and re-imagined it for 2015. It is barren and tough, with little movement yet the complexity of the original is present. Each scene seems long, yet sparse. It is fascinating.

Jane Montgomery Griffiths, who adapted the play, dominates as Creon, the leader who bows to public perception over what may be argued as the moral thing to do: to allow Antigone to bury her brother against societal rules. But when Antigone sounds her final song, her final prayer, her final ritual; this is the pinnacle of Emily Milledge’s performance.

I’ve always found the staging at Malthouse to be fascinating, and in this performance lighting director Paul Jackson uses exposed white lighting, at times dim and other times blindingly bright to add to the stark hopelessness of the play. And then there is the bloody water. A slow appearance that comes to dominate the scene, to reflect the torment, to disallow any character to escape the tragedy.

I’m not a classical scholar, I am very aware that there are far deeper readings to this piece. But what an interpretation like this does so well is to remind you why classic theatre needs to be adapted and performed again and again; universal truths are universal, and the tragedy of ancient times is just as relevant in the politically and morally-challenging present as ever.