With the most natural, raw, uncomfortable and hilarious opening monologues we have probably ever seen in Australian theatre, Patricia Cornelius’ Shit smacks you in the face and commands you to sit up, strap yourself in and FINALLY start paying attention to the women and girls who defy our social order and expectations. 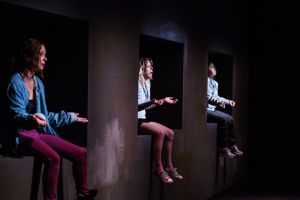 These are the underbelly of womenhood we as a society so rarely want to admit exist. The women we try and ignore when walking down the street and would never sit next to on the tram. You know the type, the ones whom some would callously say “were asking for it”…

Shit tells the stories of three of these types of women, Billy (Nicci Wilks), Bobby (Sarah Ward) and Sam (Peta Brady) as they come to terms with their past, of abuse, rape, suicide, bashings (“Sometimes you’re just in the wrong place at the wrong time”), and shines a light on the bleak harshness of our society (“What right have you got to want?”)

Moving effortlessly and gracefully from gritty sarcasm to shocking realism, I often found laughter caught in my throat as what started as jovial banter turned sharply into an intense truth which is perhaps too hard to swallow without the humour. With this, Shit takes you on an emotional journey which is given breathing space beautifully by director Susie Dee and the physical theatre which is interspersed throughout the performance.

An outstanding performance I should add, as rapid fire dialogue is spat like bullets, particularly by Bobby (Ward) who gives venom to her words. While Billy (Wilks) moves from frighting to loveable and back again in an instant, is captivating to watch, but it is Sam (Brady) who takes our heart as the most vulnerable of the pack.

Shit is independent theatre at its best. It has something to say and from that first opening monologue you just want to hear it. How refreshing it is to see such captivating work being staged at a mainstream theatre – maybe now their voices can be heard by the many. Will you listen?