Michael Olsen’s Dog Day Trio presents a trilogy of monologues of people lamenting and reminiscing about their contrasting and varied lives. While the narratives are linked by themes of love, loss, death, and life passing us by, they are highly individual stories about an assassin, a widower and a hotel housekeeper.

We open with Cynthia (Rosa Nix), as she irons her handkerchiefs and gradually reveals that she was – and still is – an assassin. As she teaches us the 9 steps to being an assassin, she beguiles us with her past identities and kills: “You always remember your first,” she fondly says. 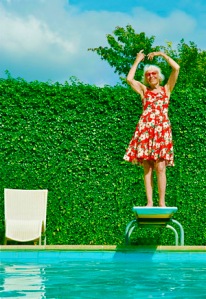 The story is intriguing and filled with light comedic moments from this seemingly gentle murderess, in an intelligent believable performance by Nix. All the elements of writing, directing and acting come together so seamlessly in this piece that I could easily have watched Cynthia’s story unfold for an hour.

Unfortunately I felt the other two stories of mournful George (Kirk Alexander) and hotel housekeeper Betty (Kelly Jane Harrison) are not as absorbing. With Betty’s narrative timeline traveling back and forth, and with many characters introduced, her story is difficult to keep up with. On the contrary, while George’s narrative is more linear, it felt a little too long to sustain audience interest. Both these stories have potential to be just as affecting as Cynthia’s with some fine-tuning to the narrative. Despite these issues, Alexander and Harrison’s performances are also well-thought-out and authentic.

Hanna Riley’s sound design in Dog Day Trio is integrated into the show quite well, and I’d like to see this element incorporated further into the monologues as the overall work develops, to build on creating the individual worlds.

Given the already limited space at La Mama, you would think isolating the actors into three different spaces would not be a wise choice but by doing so, director Tammie Kite creates a highly intimate environment that actually gives the stories life and connection. Visually, the stage ends up resembling a Venn diagram: three different experiences ultimately linked by the fleeting moment that is, in fact, life.

Dog Day Trio is on until Wednesday 10 December at La Mama Theatre as part of their Explorations season, which supports new works in various stages of development.