Once Were Pirates is a two-pirate show directed by Daniel Czech and written by Emily Collyer, the winner of the 2013 Fringe Best Emerging Writer. 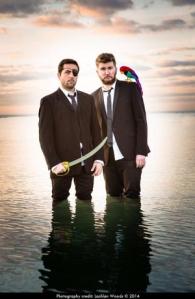 The two pirates Shane and Gareth (Ben Clements and James Cook) embark on a journey of attempting to assimilate into the modern world. What ensues is a combination of angry pirate Gareth’s decent into an overworked metrosexual pirate and Shane, a pirate with a heart (who spends too much time reading the self-help sections in Cleo), returning to some old tricks of the trade to get by.

The initial blurb I read about the show suggested a comedic look at pirates trying to navigate modern life in Melbourne; this is only partially true. There were a number of comedic moments, but Once Were Pirates was more a philosophical investigation of the brutality of the modern world than a comical one.

The sets, music, lighting and direction were all excellent, as was the acting. The fight scenes looked very authentic and it was clear that a lot of time and thought had been put into how to effectively stage this two-man show, given there is no change of scene. Both Clements and Cook are superb and are able to convey both the harshness of their pirate pasts as well as the inner-conflict the self-reflective moments require.

The show is good but it did leave me with a lot of questions: some logistical – how did the pirates happen to find themselves in modern-day Melbourne? – and some philosophical – would pirates really be disturbed by the modern world? Because of these, and many more unresolved queries, I left feeling unsure about what to think, and perhaps this was the show’s intent all along.

Once Were Pirates is at times funny, but is mostly a genuinely interesting take on modern life, and what it means for work, humanity and pirates. It contains its fair share of explicit language, and given the thinking required, it’s certainly not for the lily-livered, faint o’ heart.