In The Art of Fucking, four friends are holding an intimate reunion for the return of one of their own who has spent the last year overseas. Through the course of the evening however, there are mentions of something that happened the previous year which has left its mark on each of them… 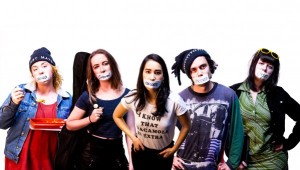 The play is divided into three parts, with everyone meeting up for the reunion in the first. James Shaw excels in directing the cast and keeping the mannerisms and characterisations between the five long-time friends as natural as can be. With the characters confined to a living room for 45 minutes, keeping audiences entertained could have proved an arduous task, but Shaw explores the connection and relationships these characters ought to have carefully. and pushes for the minutest of interactions to occur.

Unfortunately, the same realism and appeal is not foregrounded in Phoebe Anne Taylor’s script which, try as the actors might, was full of dialogue that felt forced and unnatural. There are constant awkward silences scripted between a group of friends we are led to believe are very close and feel completely relaxed with one another, and much of this initial conversation was repetitive and seemed to have no purpose.

The second act is a monologue performed by Isabel Hertaeg who is great to watch as an actor, and delivers one of the more convincing performances of the evening. Hannah Bolt also manages to bring authenticity and emotion to her character throughout The Art of Fucking but it appeared some of the other cast needed to invest more in their characters to convey the honesty and depth they should have been feeling.

The third part of the show would have to be the weakest and is only saved by Shaw’s direction. The actors take turns in delivering the details of the night in question with rhyming couplets that could even have embarrassed Dr. Seuss. The revelation at the end of The Art of Fucking is more absurd than shocking and feels as if the narrative was forced as far as it could go to create that “shock value”, but sadly misses the mark.

The Art of Fucking is an example of trying to do too much in a limited time; the writing, the themes and the unfolding of the narrative all need more refinement in order to be able to leave any sort of lingering impact on the audience.