Cinema Nova, as part of their National Theatre Live broadcast series, brings to their screens the West End production of the internationally acclaimed play Warhorse based on the Michael Morpurgo novel. This epic tale of the bond between a young boy and the horse he raises feels entirely appropriate for the broadcast, as this intensely theatrical production translates wonderfully to the screen. 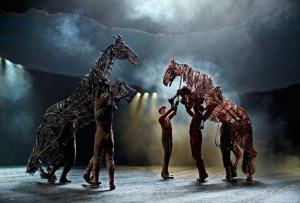 Joey the horse, the narrator of the original novel and arguably the central character of the play, is represented onstage with a fully-realised life-sized puppet operated by several visible puppeteers. The puppet, created by Handspring Puppet Company, is so articulate and expressive that it almost seems better than a real horse! Several horse and other animal puppets pop up throughout the story, particularly one hand-operated goose puppet used to hilarious effect.

Sion Daniel Young turns in a strong performance as Albert Narracott, the young boy who dedicates himself to taking care of Joey and who eventually follows him to the battleground of World War I. Jamie Kenna as his father Ted ably plays the brutish drunk whose mishaps drive the narrative of the first act, but it is Josie Walker as mother Rosie Narracott who brings simultaneously the most heart-warming and breaking performance as the woman trying to hold the family together and struggles to stay strong after her son runs away to war.

The setting is bare and minimalistic – there are no permanent sets onstage, with the fully-visible ensemble cast creating the backdrop themselves onstage, holding up branches or fence-posts to symbolize the landscape. A giant piece of a torn page held high above the stage is the only constant throughout, and is used to project images and shadows that highly characterize the setting of each scene. At different times, it seems like a window into an achingly innocent world – or at others, a gaping wound in the sky through which can be seen the hellish landscape of a war-torn country.

The first act is a gripping and wonderful piece of story-telling, but as the narrative moves to World War I France in the second act and away from the Narracott family we lose the central emotional grounding to the piece. Numerous new characters are introduced suddenly and, not helped by the fact not all of them are English-speaking, it can be difficult to connect with them in the rapid flow of the story. The quick-changing scenes on the battlefields are so dark and gloomy that they tend to get muddled in the shadows, but the final scene of the play is so emotionally cathartic and satisfying that it hardly seems possibly to walk out without a smile.

A truly superb play which, through the help of Cinema Nova and National Theatre Live, allows Melbourne audiences to experience a West End quality performance in their own city!