A giant production with so much to love

Victorian Opera Youth Opera brand new work, The Selfish Giant – based on the Oscar Wilde short story of the same name – is sure to become a favourite for opera aficionados and newbies alike.

Under the Direction of Cameron Menzies, we follow the story of the giant (Stephen Marsh) as he comes home from an extended trip to find his beloved garden overrun with happily playing children. Scarred from his childhood, and wanting the garden all to himself, the giant scares the children away. The next day Spring (Saffrey Brown) arrives with her fairies (Stephanie Ciantar and Chloe Maree Harris) to wake up the garden, but something is wrong. Soon after Snow (Michael Dimovski), Wind (Noah Ryland) and Frost (Darcy Carroll) arrive with Winter (Olivia Federow-Yemm), looking for a place to call home. Spotting the deserted garden they make themselves at home. After some time has passed, children again find their way back into the garden, prompting the selfish giant to think about sharing. Winter is banished and Spring returns.

Composer Simon Bruckard’s captures the story with dynamic shifts in mood, from the playfulness of the children and the grumpiness of the giant to the sprightly spring and the glacial winter. Some of my favourite moments come from the children playing, where librettist Emma Muir-Smith has managed to capture both the fun-loving and at-times menacing behaviour of children, in a very Oscar Wilde-esque way. There are moments of endearing wit, especially from the Dimovski, Ryland and Carroll whose characters lend themselves to Wilde’s frivolity. I wondered whether there were more moments to capture Wilde’s sardonic wit, especially for the giant.

While James Browne’s set is minimalist, the dimensions and angles of the stage and carefully placed set pieces creates the impression of an imposing house, suitable to contain an imposing giant. Browne’s costumes, however, were one of my favourite things in a production where there was just so much to love. Menzies’ use of props to represent the garden is incredible, as are all the performances. Marsh is endearing as the giant, even when he’s been selfish, and the Youth Chorus and Victorian Opera Chamber Orchestra are faultless in their supporting roles.

Tickets to this world premiere were hard to come by, and it’s easy to see why. This is a charming opera showcasing the immense talent that all of these performers have to offer. The run was short, but hopefully The Selfish Giant will get the revival it deserves.

For more Victorian Opera performances and tickets go to victorianopera.com.au

Hilarious for everyone, but a special theatre treat for the real fans…

This is one musical that lives up to its name, for this satirical parody has been crafted to satisfy even the most obsessive musical theatre fans. As part of MICF this year, The Musical of Musicals: The Musical takes one simple plot line and tells it 5 times over in completely different styles, so while never repetitive, it is entirely hilarious. 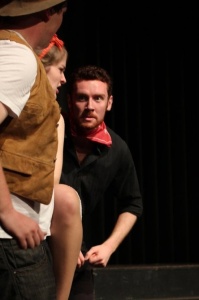 The plot follows a young woman (Emma Hoy) who can’t pay her rent, her boyfriend (Jack Brown) and her older confidant (Bianca Bruce) and their constant battles with their demanding landlord (Josiah Lulham). Audiences also enjoy a one-man ensemble/narrator (Michael Leaver). The 5 famous composers that are acknowledged are Rodgers & Hammerstein, Stephen Sondheim, Jerry Herman, Andrew Lloyd Webber and Kander & Ebb. For reasons obvious to anyone that has seen any of the works of these artists, each time the story is repeated in another of these styles, there is a totally different outcome.

MoMTM provides its fair share of laugh-out-loud, slaptstick moments that any audience would enjoy, but it is the true musical theatre fans that will really appreciate this show. Each section is full of references to the composers’ works from obvious musical cues to subtle dialogue references that only tickle the funny bones of those in the audience with the most astute theatrical knowledge. There is also a risky amount of blatant criticism of some of the trademark indulgences of the legends that almost invites a gasp of horror at the delivery.

The cast work seamlessly together as all but Lulham have worked together on the show previously. While they were all a joy to watch, Bruce’s stage presence is hard to tear your eyes from. Her comic delivery of diva Abby in Dear Abby (the Jerry Herman tribute) was enough to have viewers in stitches. The whole cast performed the show without microphones, but due to their ample talent, this was never an issue. Along with this finely-tuned cast, musical director Simon Bruckard uses only a single piano to provide fantastic support to his players and created some magical moments for the audience to enjoy.

Technically, the show could have had more support. There were times when it wasn’t clear if the follow spot was lagging behind as a gag or if the operator had actually fallen asleep but aside from that, it all moved quite smoothly.

Overall MoMTM was a performance worthy of the deafening applause it received that can only be created by a true musical theatre audience.

In presenting a homage of sorts to their favourite musical Jason Robert Brown’s The Last Five Years, Drew Collet and Sophie Weiss have managed to create a truly creative and uniquely Australian piece of cabaret.

Weiss and Collet have taken certain licences with the storytelling itself, taking the time to introduce themselves before the show ‘started,’ giving out free popcorn and cracking jokes at each other’s expense.

This may have seemed like an unnecessary deviation from starting the show, however they incorporated many aspects of the aforementioned jokes into the later story (for example, Sophie’s loud voice or Drew’s less-than-committed Jewish/American accents). This whole approach allowed the audience to get past the stigma of audience participation, as it was a vital part of their show.

Beginning at a restaurant, The Last Five Beers accurately captures the awkwardness of meeting an ex-lover. The pair heightened aspects of their personalities into new characters; Sophie emerged as a neurotic stress-head whereas Drew appeared too much of a relaxed bloke to really cope with that type of person, and so, it was clear early on the pair weren’t right for each other.

Still, the discussions of the good times versus the bad showed a nice quiet chemistry between Weiss and Drew, and a perfect explanation of why the relationship went south in the first place.

The cabaret itself was rich with a diverse range of music to inform the story, Weiss and Collet had ample time to showcase their incredible talents, and despite a few shaky moments, Collet recovered well to hold the stage for some of the more tender moments (in particular, a beautiful rendition of Sorry Seems to be the Hardest Word).

Weiss has a phenomenal voice, which sometimes was too overpowering for the small space of the Club (but again, Collet had established this in the opening, so it was still funny).

Overall, the show was extremely humorous and felt very fresh and exciting to watch. The performers’ energy was matched by the expertise lighting and direction of Glenn Van Oosterom, and Simon Bruckard on piano was delightful in skill. This is a wonderful piece of cabaret not to be missed.

The Last Five Beers is playing this weekend at The Butterfly Club.