Fine performances in a challenging musical

Merrily We Roll Along, currently being presented by Watch This at the MTC, is one of Stephen Sondheim’s most beloved scores but was regarded in its original Broadway incarnation as a critical and commercial flop. Part of this is due to the challenging structure of the show, moving backwards in time to unravel the complexities of the characters depicted, but also since we begin with the central character at his most morally corrupt it can be hard to generate sympathy for him. 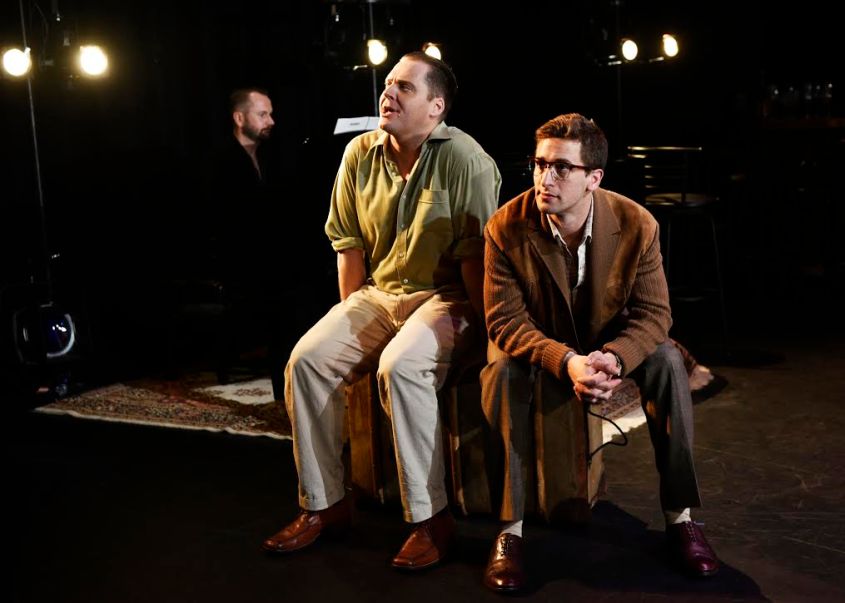 As this character, Franklin Shephard, Lyall Brooks faces an uphill battle trying to make him sympathetic. He acts and sings the part very well, but feels stronger as the older Frank more than the younger one. Nelson Gardner is charmingly nerdy and goofy as Charley, bringing wonderful physical comedy to the role. Completing the central trio in the role of Mary is Nicole Melloy, and she is so brilliantly funny and heart-breakingly transparent in every moment that it feels like the role could have been written for her – watching her in the part makes a compelling case that the show’s central journey is actually Mary’s instead of Frank’s.

Sophie Weiss as Beth ably handles the show’s biggest ballad, ‘Not A Day Goes By’, and her character’s transition from a haunted and heart-broken woman to the sunny naivety of youth. As the famous Broadway star Gussie, Cristina D’Agostino nails her big dance number but doesn’t manage to find the humanity under the glamourous façade, directed to play the character so over the top that it comes off a caricature. The ensemble, playing a wide variety of characters across the twenty-year time lapse, are marvellous with too many standout moments to recount here, and their united voices as they sing ‘Our Time’ are a truly beautiful conclusion to the evening.

Sara Grenfell’s direction and staging feels slightly confused which is a problem with a show such as this where there is already a complex structure, and the minimalistic set (consisting mainly of a large staircase and a set of curtains) tends to blur the scenes together. Cameron Thomas does a wonderful job as the sole musician in this production, and while it is lovely to hear the voices of the cast and ensemble unamplified in the space, the score loses much of its potential power when played only on the piano.

While not entirely successful on all fronts, the collection of strong performances and Sondheim’s magnificent score make this new production of Merrily a worthwhile visit.

Working out the kinks

Who ever said that sex and exercise have to be mutually exclusive? This is definitely not the case with the new musical comedy directed by Sara Grenfell and presented by Aleksandar Vass and Malcolm C. Cooke, Sexercise, where we follow a married couple’s journey to rediscovering the fun and sexy times in their relationship.

The strength and success of Sexercise lies very much with its talented group of actors. Despite two solid hours of acting, singing and dancing, the small cast all manage to keep their energy levels up and the further we progress with the story the more this dynamism is visible. Clearly there is much fun to be had on stage, with the audience and with each other.

Nicole Melloy and Lyall Brooks are both extremely likeable as married couple Sam and Joe. They could easily have been pigeonholed as the annoying nagging wife and the insensitive, ignorant husband but they are able to expose a vulnerability to their characters that is natural and subtle whilst still bringing on the laughs and delivering the jokes.

The rest of the cast consisting of Fem Belling, Cameron MacDonald, Kristin Holland and Lulu McClatchy display their ability to support the protagonists but also command the stage when required. It almost reached the point where I wanted to learn more about these people than Sam and Joe: what exactly is going on in Andy’s marriage and who is this woman that has broken Tania’s heart? Writer Derek Rowe does well to feed the audience just enough information that we eagerly await the return to the stage of these characters.

While there may be some funny and touching moments in Sexercise, there are scenes that are too long and seem to drag to their conclusion and others that apparently don’t even need to be included. At a running time of over two hours, I felt some editing is required to allow the story to stay snappy and constantly moving forward at a pace that allows our attention to not falter.

While the musical numbers, also by Rowe, are on the whole enjoyable, there are some that seemed unnatural and awkward but due to the talent of the performers, were still fun to watch. Sexercise’s musical highlights )directed by Trevor Jones and choreographed by Dana Jolly) included ‘Mates For Life’, ‘Are We Done Yet’ and ‘36 not 23’ but by far my favourite song of the evening would be MacDonald and McClatchy singing ‘It Might Be Different This Time’, a wonderful number which could have been the signature song for every characters’ journey in this production.

Sexercise is more than just a story of 30-somethings wanting to have sex. It is cheeky, it is fun and it is naughty but it’s also about a group of individuals trying to connect with someone else. By cutting down the running time and undertaking some rewriting, this new musical has the potential both to make that theme more meaningful and create greater enjoyment for the audience. Nonetheless, this production of Sexercise is still worth seeing for the stellar effort by the excellent cast.