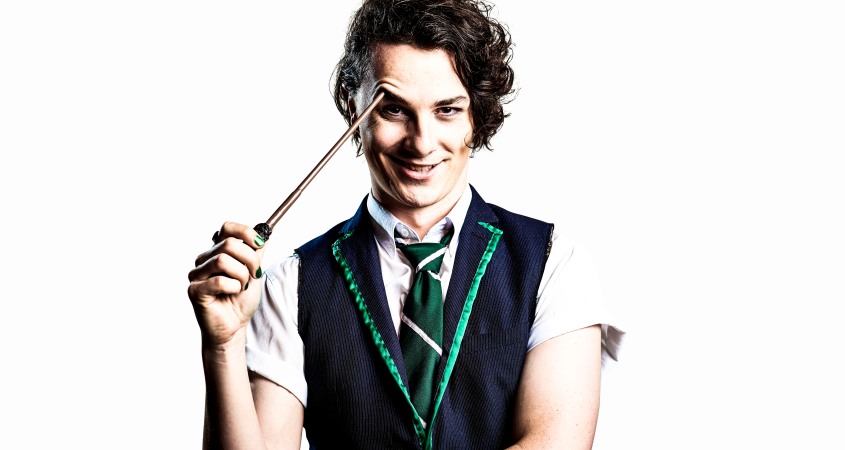 After a painful hiatus, it’s safe to say that theatre has returned to Melbourne with a bang. And Salty Theatre’s latest production ensures that bang is a wild explosion – of infectious, ferocious energy.

Voldemort and the Teenage Hogwarts Musical Parody is a haven of in-jokes, subtle winks and overt nods for Potterverse Potterheads, who will lap up every reference and expert impression this packed extravaganza offers. Writers Fiona Landers, Reuben James and Richie Root rely on the bottomless well of Potter tropes to effectively expedite their exposition, and propel the audience through an upbeat hour of boisterous musical parody.

Miranda Middleton (Director and Choreographer) ensures that clear storytelling rockets us through dozens of vignetted scenes and songs, building a slapstick, melodramatic world, filled with wild lines from wild characters. Middleton’s heightened direction helps the show to especially lift off in the second half, with converging plot lines, elements of murder mystery, and appearances from classic Potter characters.

The cast of seven are a slick ensemble, and it is clear they are having enormous fun in every moment. David Youings’ Musical Direction lifts the show from parody to professional, showcased with tight, delicious harmonies in songs like ‘Foreshadowing’, and the catchy opening/closing numbers. Every individual is given ample opportunity to showcase their finely honed, powerhouse vocals, and there are sensational highlights from Mel O’Brien as doting Hufflepuff Muffin Rows, and Jonathon Shilling as complicated Derald Bacon. Ellis Dolan’s frustrated Professor Al (“another day, another child’s body”) is a ferocious tour de force of rowdy wit and scene-stealing lines (“I’m going to go stick my dick in the sorting hat.”)

The Battle Of The Bands sequence gives moments to shine for Stephanie John as Hogwarts’ own ‘Mean Girl’ Genevieve Griffyndor, and Emily Hansford as ostracised Myrtle Warren – whose journey from caterpillar to butterfly is sweet and hysterical. Jonathon Shilling plays every sweep of Derald Bacon’s 180 degree character arc with glee. All three must be commended too for special appearances as well-known core Potterverse characters – these expert, over-the-top impersonations are an unquestionable highlight of the show.

Jay Haggett as Hagrid, and Alex Donnelly as Tom Riddle are audience favourites, brilliantly exploiting measured moments of subtlety amidst the raucous chaos. Haggett’s featured operatic vocals are especially impressive, and Donnelly’s paradoxically sweet but cruel disposition keeps us invested at every turn, finding the joy within every evil intention.

Theatre Works’ unique approach to COVID safety involves raised plexiglass booths that seat small or large groups, arranged in the round. While these reflective, non-absorbent surfaces may have hindered clear Sound Design, their arrangement has thankfully inspired a genius Set Design from Madeline Nibali. Detailed paintings of crests hang above our booths, denoting which Hogwarts house your section belongs to, further immersing and engaging us as we are encouraged to campaign for our allocated house throughout the show.

Salty Theatre are welcomed fresh faces on the Melbourne independent theatre scene, striving to bring “the culture of workshop musicals to Australian audiences”. They have delivered another powerhouse production with this imported gem, and I eagerly await their future festival circuit discoveries and cultivated local originals.

Potterheads who adored Puffs or A Very Potter Musical are strongly encouraged to grab their broomstick and fly to this frantic, frenetic Hogwarts frenzy. Running for a limited season until 10 April (they have started adding extra matinees and late shows for some dates!), there are very few tickets remaining at https://www.theatreworks.org.au/program/voldemort/