Created by the House of Vnholy and performed as part of the 2015 Melbourne Fringe Festival, Homme is a performative piece that explores male identity and contemporary masculinity in Australia. Through a series of vignettes and in complete silence, the differences between what it means to be a male and be a female are subtly explored. 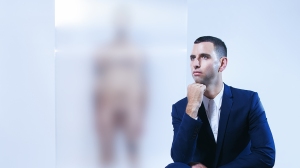 It is standing room only during the performance, with Homme enveloping virtually the whole space.  The white flooring is bare except for a number of select items, including a washing machine, a bundle of black balloons, a megaphone and a plinth. The two performers – Matthew Adey and Rebecca Jensen – are dressed in black and the only time they speak is when they ask audience members for assistance with the props.

An audio menagerie of animal sounds play out from the speakers as Adey undresses and rests atop the washing machine in tableau. In conjunction with these sounds, Adey very much resembles a reposing lion, which evokes the idea of masculinity and the animal kingdom and being the king of the “jungle”.

At one point during the performance, Adey resumes his standing position, still unclothed, and opens himself to be the object of not only Jensen’s gaze, but also ours. Later, Adey ‘battles’ with a plinth, as he hugs, clings to and succumbs to the over-powering weight of it. Like a Greek sculpture battling to return to his rightful position on a pedestal, so to is masculinity struggling to demand and retain its position of power.

The 30-minute performance moves quite slowly and at times, there is no movement happening at all. However, the striking images and vignettes give the audience the opportunity to venture inside themselves and think about the issues HOMME is raising as the performance is inviting these thoughts without letting us miss out on what comes next. HOMME asks us to question what being a “man” in contemporary society entails while hinting that the masculine and the feminine are not so different after all and perhaps there is no necessity for division and differentiation.

Billed as a ‘dance of the heart’, Janine Proost’s Potential will go down in my memory as one of the stranger theatrical performances I have ever experienced, and I mean that as a compliment. The audience is lead in through the doors of Studio One at the Northcote Town Hall to find our four performers (Janine Proost, Natalie Abbott, Rebecca Jensen and Amelia McQueen) lying splayed on the ground covered in a blanket of playdoh. The four women are wearing gold lycra outfits, and invite the audience to take some of the playdoh heaped onto their chests…

What follows is 60 minutes of dance and yoga that will leave you pleasingly puzzled. It was clear that the inspiration came from the body, but that it came from the heart wasn’t always obvious to me. There was certainly a lot of feminine imagery (a vignette of a mid-birth playdoh baby springs to mind), which is always interesting. I loved how the energy of the performance mirrored that of a yoga class: starting with slow movements, breathing, simple postures and building to a crescendo of occasionally painful movements across the stage that were at times quite difficult to watch. There is a lot of quiet in the performance, and it beautifully counterpoised the manic cacophony of noise that made up part of the third act.

Special and particular mention must go to Matt Adey whose lighting design was spectacular and very evocative. The harsh stage lights illuminated the faces of the performers in ways that caused them to be at once beautiful and pained (the kind of facial expression one can only get from an hour of yoga).

For my first Melbourne Fringe Festival show this year, it was quite an experience. I’m very excited to see what Proost comes up with next and will be first in line to see it.

Potential is on every night until Sunday 5 October at 7:30pm at the Northcote Town Hall. Tickets are $26 at http://www.melbournefringe.com.au/fringe-festival/show/potential/