The Sleeping Beauty by Charles Perrault is one of the classic fairy tales, and one of my least favourites with its thin plot and troublesome resolution. I was not familiar at all with Respighi‘s opera before seeing this production, but I enjoyed it immensely. The story is fast-moving and compelling, and the music delightful. It was originally written in 1922 for an Italian puppetry company and it has been brought into the twenty-first century quite cleverly by Victorian Opera‘s artistic director Richard Mills and director Nancy Black. 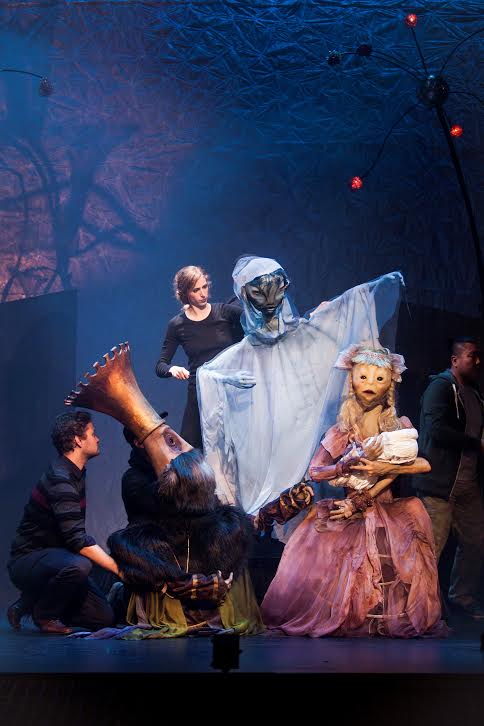 A cast of singers dressed in contemporary attire recount the story as it is acted out by talented puppeteers manipulating some remarkable puppets designed and built by Joe Blanck. They moved about an uncluttered stage with a gothic atmosphere, gorgeously lit by Philip Lethlean throughout.

Solely responsible for the movement and action, the puppeteers threw themselves, and occasionally each other, around the stage. In particular the humour and physicality of the Prince (performed by Vincent Crowley, sung by Carlos E. Bárcenas), with his Dirty-Dancing-era Patrick Swayze bearing, was spectacular. In gradually losing his puppetry aspects until nothing more than a pocket square remained, this became one of the strongest moments of the show as The Prince shed the trappings of privileged life to succeed in his arduous journey of discovery.

A large part of the production effort went into the lavish and eye-catching puppets. Although the inspiration for their design is said to have come from Danish illustrator Kay Nielsen, there are clear layers of influence from other Golden-Age fairytale illustrators such as Arthur Rackham and Ida Rentoul Outhwaite. There is some disjoint as a consequence, with the Blue Fairy being by far the weakest design in both shape and movement, yet one of the most prominent on stage. The smaller puppets such as the cat and spindle were far better developed, their movements lending Disney-esque moments of humour to the performance.

In bringing the story into the present – it is modern times apparently when the Princess is awoken –  there was the opportunity for the creative team to bring in some pop-culture references. This had a two-fold effect for me. Firstly I was annoyed that in trying to escape some of the less pleasant aspects today’s world they suddenly appeared on stage before me, and yet it gave a telling opportunity to reflect on that aforementioned “troublesome resolution”. The expectations for and treatment of young women today are at complete odds with the 1620s culture of the source tale. You could not conclude a story nowadays with a happy-ever-after via an non-consensual kiss. (Or more, should you choose to read further back than Perrault). Without giving anything away, on reflection, the recasting of Mister Dollar was very clever indeed.

The vocal performances of the entire cast were simply outstanding. Of especial note were the work of Elizabeth Barrow as the Blue Fairy and Raphael Wong as the King. One small wardrobe choice which did constantly irritate however was The King’s relaxed interpretation of the costumer’s memo as ‘casual wear’ instead of the neat casual the rest of the cast wore. I would hardly expect a King to ever be dressed in cargo pants and a hoodie.

The live score by Orchestra Victoria, conducted by Phoebe Briggs, was the finishing touch on this highly enjoyable evening. It would be a wonderful introduction to the world of opera, particularly for families.