This production of Kander and Ebb’s Broadway classic Cabaret, opening in Melbourne after a sold-out Sydney season, left me with incredibly mixed feelings – a collection of fantastic elements that never quite coalesces into a satisfying whole. The set, itself a stylized stage surrounded by nightclub seating that neatly blends into the first few rows of the Athenaeum Theatre, suggests a blurring of the line between performance and reality but this is never capitalized on in the show itself. For a musical that should seem eerily relatable in our current political climate, it never becomes quite clear what message this production is trying to deliver. 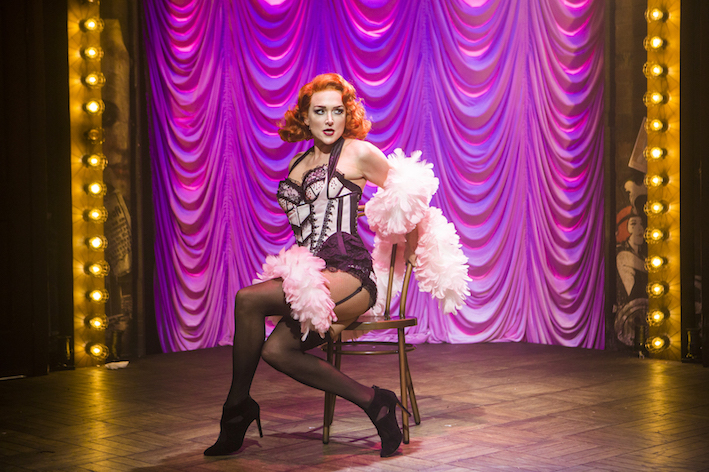 Australian cabaret and theatre legend Paul Capsis easily inhabits the role of the Emcee, here depicted like a grotesque ventriloquist’s dummy, and even though he spends most of the evening onstage watching and occasionally assisting in the action he feels oddly under-utilized – darting in and out of scenes, it feels as though we are never given the chance to savor and drink in Capsis’ unique stage presence.

As the central character Cliff Bradshaw, Jason Kos does a fine job in the first act of delineating the character’s stiffness melting away into sexual awakening but his performance became oddly disjointed and robotic towards the climax of the musical which robbed the more tragic moments of any poignancy. In contrast, Chelsea Gibb as Sally Bowles gives one of the best performances of her career, finding the desperation and insecurity lurking under the flightiness and affected ‘little girl’-ishness that Sally constantly projects as a way of escaping her problems. Even as she flees from reality and responsibility, you feel incredibly sorry for her.

The supporting cast as a whole are wonderful. Kate Fitzpatrick and John O’May as the elderly Fraulein Schneider and Herr Schulz had a lovely chemistry, making their ill-fated romance all the more heart-breaking. Deborak Krizak as Fraulein Kost brings her un-erring physical comic chops, and in the final scene even manages to bring a tragic dimension to the character’s fate. The ensemble execute Kelley Abbey’s choreography with ghoulish panache and deliver strong performances in small cameos throughout the show.

Sound issues plagued the entire performance I attended, with a few missed cues and microphones randomly switching off, which would be understandable on opening night – but immediately before she could start singing the title number of the show, Gibb’s microphone completely cut out. She was forced, with the loving insistence of the onstage Capsis and an off-stage yell from director Gale Edwards, to leave the stage completely mid-performance to have her microphone replaced. Capsis sweetly vamped onstage for time before he was given the cue to re-introduce Gibbs onstage, to overwhelming and supportive applause from the audience.  When Gibbs began her number again, the sound issues continued with wash-over from other mics backstage coming through – nevertheless, Gibbs rose above circumstance and knocked the ball out of the park with a performance of the titular song ‘Cabaret’ that not only demolished the hearts of the audience but, astonishingly, even managed to banish any memory of Liza Minnelli’s iconic rendition. It was one of the most electrifying moments I’ve ever experienced in the theatre, and generated a mid-show (and well-deserved) standing ovation.

While the production itself does not always rise to meet such lofty standards, theatre-goers should rush to see this performance for the ages!

Tickets: ticketek.com.au, Ticketek outlets or at the venue.