Like many artists of his time, Michael’s music, fashion and unique approach and outlook on life has allowed for him to remain a stronghold in the hearts and minds of music lovers of all ages. The tributes are naturally endless and on October 17th, Melbourne held a very special tribute of their own.
George Michael: Listen to Your Heart was a 2 hour long tribute to not only the music behind the man, but also the man behind the music. Household names Rob Mills and Hugh Sheridan joined a cast of former Voice contestants and music theatre personalities to take audiences through Michael’s extensive discography, making some spoken word tributes to what the man meant to them as artists. The cast were joined by a tight and impressive full orchestra, all under the helm of maestro John Foreman OAM.
Whilst many of these tribute shows run the risk of being self indulgent on behalf of the cast (the people on stage making it more about themselves than the artist they are honouring), this show’s biggest strength was that it did the exact opposite. It was only ever about Michael, and the connections the cast made between themselves and Michael never felt too facetious or fabricated. There was a genuine and palpable love for Michael being shared by the cast and the audience.
Production values of lighting and choreography never took too much focus away from the main focus; the entire night was undoubtedly Michael himself.
The cast did a solid job, and it was enjoyable seeing such a diverse musical cast representing different parts of Michael’s musical talent and skill – I think you would be hard pressed to find one artist who could encapsulate Michael in his entirety these days. Special mention must be made to Sheridan for perfectly showcasing Michael’s smooth and sexy jazz side.
A great night for all ages, it was fantastic seeing such a diverse demographic in the audience, all attending to enjoy a night of unforgettable music in recognition of such an important musical icon.
George Michael: Listen to Your Heart played at the Arts Centre’s Hamer Hall for one night only.

The madcap trials and tribulations of a Broadway-bound musical falling apart at the seams, a classic ‘whodunnit’ murder-mystery, a romantic comedy as well as a tribute to all people with passion for the theatre, all bound together by the final score devised by the legendary team of Kander and Ebb – who could ask for anything more in a show? 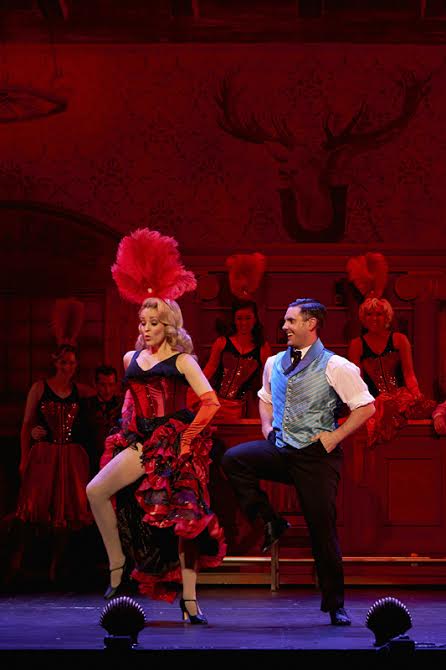 Simon Gleeson in the role of Lt. Frank Cioffi – lead investigator of the aforementioned murder – is a revelation, his leading man charisma channeled into a role that would be the comedic sidekick in any other piece but here is the focal point of this ode to the theatre world and its people. His comedic timing is exceedingly precise and his rendition of the wistful ‘Coffee Shop Nights’ is absolutely mesmerizing, his rich resonant voice peeking through at a few artfully chosen moments.

The rest of the cast work wonderfully as an ensemble but a mixed bag in terms of individual success. Melissa Langton as the brassy producer of the show nails her character’s bitter (and hilarious) one-liners, but her big number ‘It’s a Business’ falls slightly flat despite her magnificent belt. Alex Rathgeber finds the heartfelt sincerity in his caddish composer, and his touching ballad ‘I Miss the Music’ is a highlight of the show – Lucy Maunder is radiant as his estranged lyricist/wife. Alinta Chidzey sang beautifully as the ingénue Niki Harris but tended to vanish in a role that seems bland and underwritten.

Colin Lane was slightly off-kilter at first as the British director of the show within the show, his accent seeming a little wobbly, but found his feet with pithy non-sequiturs punctuated throughout the evening. Nicki Wendt as the woefully untalented diva whose demise launches the plot delivers a performance of such scene-stealing awfulness that it feels slightly disappointing (in the best possible way) to see her for only the first five minutes of the show.

The ensemble had clearly worked hard at creating individuated background characters, devising moments of sneaky comedy for those looking hard enough, and danced brilliantly in all their numbers, with the orchestra under musical director John Foreman giving the glorious Kander and Ebb score the magnificent treatment it deserved at all times.

Balancing an incredibly tricky mixture of narrative tones, The Production Company delivers this Australian professional premiere with panache, this tribute to the ‘theatre people’ of the world as a whole shining with warm-hearted joy.