A rare chance to see a superb show

The Production Company’s Promises, Promises stars Matt Hetherington as Chuck Baxter, a low-level accountant in a huge corporation, struggling to be noticed both by his bosses while the girl of his dreams, waitress Fran Kubelik is played by much-loved Marina Prior in ever-reliable form. The show itself is genius, taking a filmic masterpiece in Billy Wilder’s The Apartment, and adapting  it to the stage with glorious music from Burt Bacharach, complete with his exciting and idiosyncratic shifts in meter and harmony. Add to this Neil Simon’s witty and skilfully crafted dialogue, and Hal David’s heartfelt lyrics – how could this show not be amazing? 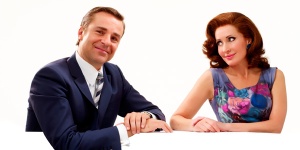 Hetherington turns his Jack-Lemmon charm on the audience from overture to finale, particularly in the number “She Likes Basketball.” The supporting leads, Chelsea Plumley and Robert Grubb, also gave stellar performances. Plumley was either sorely underused, or used to perfection, playing a small cameo role in one of the most entertaining scenes in the show. She trod a beautiful line between dignity and a complete shambles, all delivered with perfect comic timing and fully-realised characterisation. Grubb was perfectly cast as Dr. Dreyfuss, turning something of a sourpuss into a loveable curmudgeon.

I was delighted to see the orchestra on stage. Half the joy of music theatre for me is the visceral experience of live musicians, and watching them under the tight direction of Guy Simpsonwas pure bliss. The ensemble were spectacular – and aren’t the ensemble the most underappreciated aspect of any show?

Here though, “Turkey Lurkey Time” and “A Fact Can Be A Beautiful Thing” were beautifully executed, and two of the best numbers in the production thanks to the energy and enthusiasm of the ensemble. Particular mention should be given to Hester Van Der Vyver, who with her small but pivotal role as Miss Olsen, came close to stealing the show.

The Production Company has enjoyed a brilliant year with its inspired choices, and their production of Promises, Promises ends it beautifully. In excitedly looking forward to their 2013 program, I can only suggest that you quickly rush to see this too-seldom performed, absolute gem of a show.

Promises, Promises is on at the State Theatre, October 3 to October 7. Book at artscentremelbourne.com.au or call 1300 182 183.