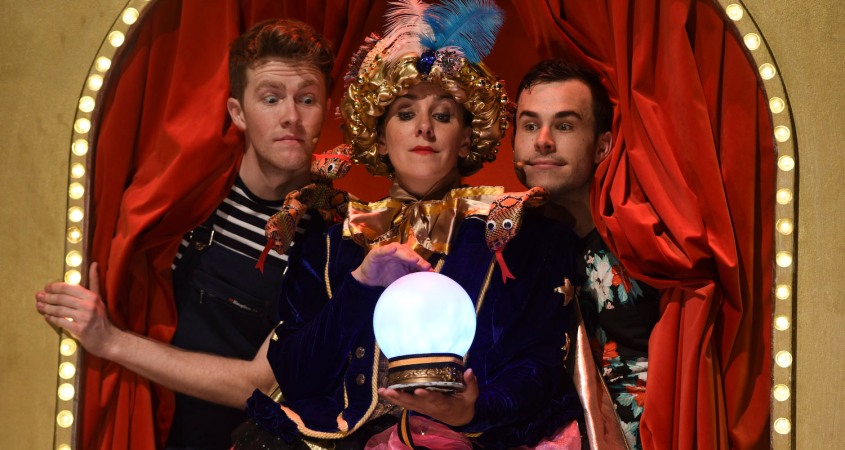 A show with an anything-can-happen feeling

Behold, the lobby of the Melbourne Arts Centre contains a giant submarine sandwich as big as a real submarine for your kids to command! This is the first taste of the oversize imagination in The 91-Storey Treehouse based on the best-selling series created by children’s author Andy Griffiths and illustrator Terry Denton and adapted for the stage by Richard Tulloch.

Now towering at 91-storeys, Andy’s and Terry’s treehouse ups the ante from the previous 78-Storey CDP Kids stage production, with vast and dangerous levels including a desert island, an oversize whirlpool, a brain-draining fortune teller named Madame Know-it-All, and the terrible task of babysitting Mr. Big Nose’s three grandchildren who keep disappearing. It’s a polished, inventive, silly and stupendous production about imagination and solving problems at the last possible second.

All four of the characters, especially the intrepid Andy and Terry, are played with fantastic energy and fine physical comedic timing, directed by Liesel Badorrek. The children in the audience enjoyed the repetitive banter between the best friends and were hooked. When asked if Andy and Terry should push the giant red button to see what would happen next, just about every young person in the audience shot up a hand with shining, excited eyes. What happens next, due to a fantastical multi-level set and design team created by Mark Thompson, is a mystery worth waiting for and one that delights the audience. With drawers that shoot open at the right time and ramps and brightly coloured curtains and hideaways, the set captures the anything-can-happen feeling that kids know so well.

Lighting Designer Nicholas Higgins deserves a special mention as he transformed the stage into a psychedelic Banana-inspired Narnia land and a massive spider web. The show features some musical and dance numbers that work well. My favourite was the one that asks kids, ‘What would you put in your treehouse?’, leaving them to dream up their own dangerous and delightful scenarios.

From the forgetful memories of Andy and Terry who are suffering from having their brains drained to the wasteful wishes of Terry who blows his genie opportunity, this instalment of the Treehouse series is a winner. I would suggest it is best suited for kids aged 6-10 but older kids who have read the books will enjoy the adaptation as well. There is a an Auslan performance on January 11 and a relaxed performance on January 18.