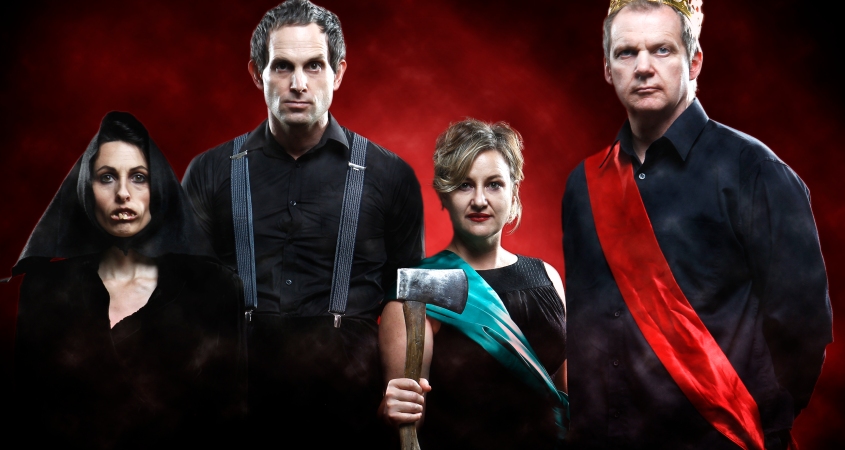 It’s a weird combination, Macbeth, The Comedy Festival and a children’s show; with all the murder, blood, and deceit, it shouldn’t really work. Somehow, Company 13, director James Pratt and actors Fiona Roake, Christian Bagin and John Forman not only make it work, but have turned Macbeth from one of Shakespeare’s classic tragedies to a joyous exploration of the dark, and disgusting side of the cursed Scottish play.

It is a reworking of the original play but it hits all the key plot points, and characters are reinvented to make them easily identifiable to the younger members of the audience whilst still managing to capture their underlying natures. The witches are more like the ugly step-sisters, kind of stupid but up to no good, goading Macbeth into traitorous action. Lady Macbeth’s sinister plots become child-like tantrums in an effort to get everything she wants and King Duncan is a bumbling, farting fool who you feel sorry for not because he is too kind, but because he’s too stupid to realise the betrayal. Banquo is non-threatening, except maybe as a ghost and all Macbeth needs is a couple of compliments to appease his pride and he turns from “who me, King?” to an entitled brat who things he’s invincible.

Macdeth is by no means a simplified version of Macbeth. Yes, there are some missing soliloquies and there are parts missing for expediency to fit the play into the one-hour kid-friendly format. However, Company 13 intermingle modern language with excerpts from the play. The balance between the two is perfect: what the audience might not understand of the Shakespearean parts is made clear through the action, the interactions between the characters and the move into more informal dialogue.

The ensemble cast of Roake, Pratt, Bagin and Forman play multiple characters and at time provide the musical accompaniment as well. There are not many props, so much of the action relies on the audience’s imagination, which is just as well, because this is a retelling designed to include kids and therefore it includes all those gross things that children tend to find amusing – farts, snot and young people’s appropriate stylised murder, to which the kid sitting behind me responded “oh, that’s brilliant”.

Having seen countless interpretations of Macbeth, this by far would have to be one of my favourites. Short and not so sweet, this is a Shakespeare comedic tragedy not to be missed.

Macdeth plays at Coopers Malthouse as part of the Melbourne International Comedy Festival until 19 April. Tickets can be purchased online or by calling the box office on 03 9685 5111.