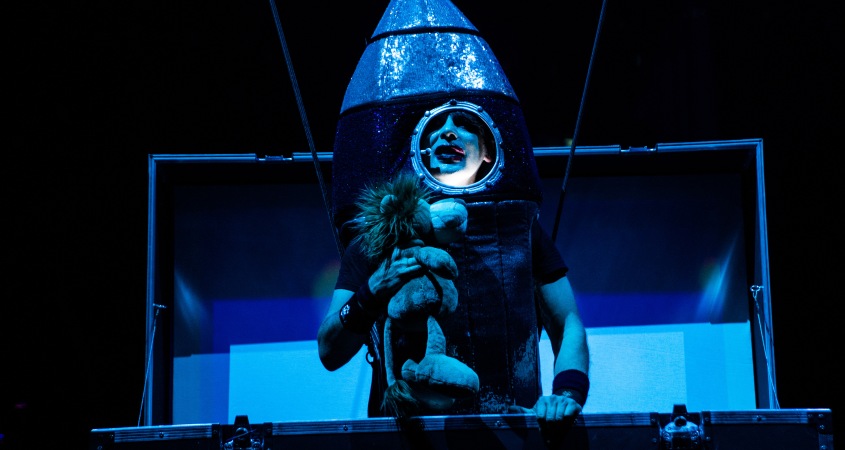 They’re certainly a little batsh*t, but that’s the appeal of the faux German duo, Astrid & Otto Rot (Aussie Clare Bartholomew and Daniel Tobias), the “brother/sister” team behind Die Roten Punkte (The Red Dots). To be frank, I walked into the Merlyn Theatre with few presumptions about the night ahead. The question for me, as a circus fan, was whether there would be enough space for some excellent circus, or would the circus be ancillary to the Rot?

It’s always fun when circus serves itself up with other performing arts, and pairing the incredible talent of Circus Oz with Otto & Astrid with their wacky punk appeal actually works out like coconut ice cream and mango sorbet – it’s a natural union of bedfellows, risqué upon risqué. However, the standout for the show really came down to the relentless energy of all performers and the crème of the crop of Circus Oz, whether they were on swinging trapeze or punk dancing in space-disco getups.

Rock Bang follows the journey of orphaned siblings, Otto & Astrid, as they escape the seismic violence of the death of their parents into a life of baked goods and the Berlin underground. Almost fatally dependent on his sister, Otto watches on from his technicolour dream world to Astrid’s descent into a drug and sex-fuelled haze. It’s very tongue-in-cheek punk rock, and makes for some outrageously funny scenes due to the performers’ excellent physicality.

Ensemble April Dawson, Alyssa Moore, Kyle Raftery, Matt Wilson, Robbie Curtis and Rockie Stone were stellar; the ensemble was exciting to watch as they performed various acts throughout the show. My only real wish was for more of them and less of the music.

Director Rob Tannion’s vision for Rock Bang is clear, it’s an in-your-face extravaganza of loud punk vibes and fantastic acrobatics. I found that frequently it was just a little much, particularly in the first act where the piece was disjointed in places, and a little unsure of its direction. This cleared up dramatically for a far more enjoyable and succinct second act that combined dance and song far more effectively. A particularly well-crafted scene was at “rehab” where Astrid makes a bold escape. I absolutely loved the choice in body doubles for the action sequences that led to some riotous physical comedy.

Although I did spy some very under-13 children in the audience, the show is really a 15+ affair, given that gang-bangs and drug use are featured. My favourite moment in the second act was hearing a little girl ask her mother, “What’s rehab?” and I glanced at my friend honestly pondering how a parent should break the rehab seal to their offspring. Now, how punk rock is that?

Rock Bang will be performed 15 – 25 November with an audio described & AUSLAN matinee 24 November. Tickets are available online and by calling the box office on 03 9685 5111.