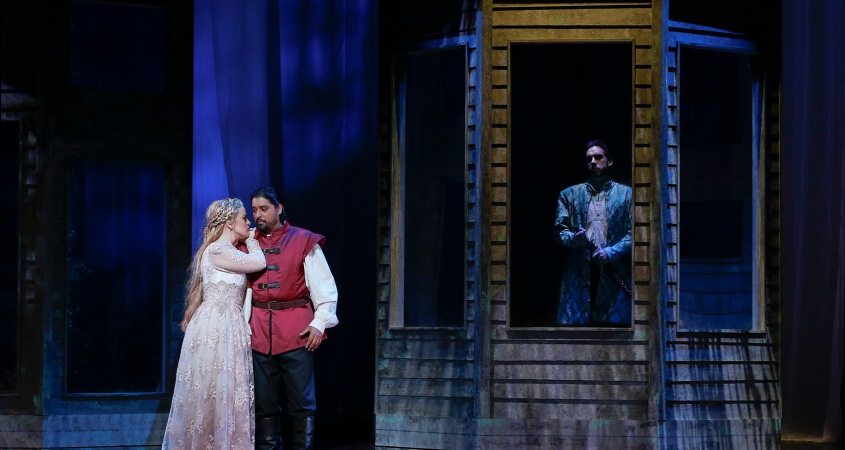 The cruelly romantic Pelléas and Mélisande as produced by the Victorian Opera is an enchanting and loyal rendition of Claude Debussy’s only completed opera. Elegantly and simply staged, this tragic tale reaches the subconscious with its haunting orchestral score and celebrated motifs. Debussy’s ingenious ability to transform content across artistic mediums is revealed in the fact this opera is based on Belgian playwright, Maurice Maeterlinck’s symbolist play of 1893. Belonging to the turn of the century, it is often associated with impressionist and symbolist movements in art and literature respectively, particularly due to its allusions to the natural world.

Caught in a web of duty, longing and revenge, Golaud (Samuel Dundas), his wife Mélisande (Siobhan Stagg) and half-brother and Pelléas (Angus Wood) form an ill-fated love triangle. After Golaud discovers the distraught Mélisande lost in the forest, he claims her as his bride and brings her to the castle where Pelléas and his parents Arkel and Genevieve (David Parkin and Liane Keegan) reside. As Mélisande passes increasing amounts of time with Pelléas, their secret relationship transitions from one of playfulness to passion before concluding with a strike of Golaud’s sword.

Palais Theatre’s ornate proscenium arch frames a fairly stark set which, excluding three spinning wooden structures, features only an enormous white sheet cast across the back of the stage. As smoke drifts from the wings, Joseph Mercurio’s exquisite lighting illuminates the backdrop establishing an ethereal atmosphere which grows increasingly lunar as soon as the orchestra and performers begin. Richard Mills conducts with great momentum and attention to silence; delicate melodic fragments sweep throughout the theatre evoking both the forest and confines of a gloomy castle. A highlight was the timpani which added foreboding depth to the score’s loftier sounds.

Capturing the famous image of Mélisande letting her hair down and Pelléas succumbing to passion, the beguiling modesty presented is indeed suggestive. Soprano, Siobhan Stagg is sublimely cast as Mélisande. Stagg brings complexity to such a belittled character who is constantly reminded of her timidity and childlike qualities by the male characters. Bass, David Parkin as Arkel reaches allegorical stature with his unearthly low notes. The rich baritone of Dundas fuels a charged Golaud, which contrasts to tenor Wood who stars in the more reserved role of Pelléas.

Director, Elizabeth Hill ensures each scene is clear and allows relationships, affiliations and individual characters to be expressed in beautiful unison with the music. While I wanted the chemistry between Mélisande and Pelléas to be more obvious, the strength and talent of each individual performer compensated for any great shortcomings.

Experiencing Pelléas and Mélisande, I felt as if I was suspended in twilight for the show’s entire duration. It left me feeling both mystified and perplexed by its disarming ability to enchant despite having such cruelty at its core. Victorian Opera has achieved an idyllic marriage of text, score and mise-en-scène with this production that deserves a much longer season.

Pelléas and Mélisande is being performed 11 and 13 October at Palais Theatre, St Kilda. Tickets can be purchased online and by calling the box office on 136 100.