Victorian Opera’s production of Leoš Janáček’s Cunning Little Vixen is a deeply moving portrayal of youth, the passage of time, and the pain of loss. Janáček’s immense skill is clearly evident in the juxtaposition of the soaring score and the conversational libretto. It struck me as a kind of fever dream combination of Animal Farm and the 1996 live-action film of Wind in the Willows featuring most of the Monty Python cast – a wicked combination of socialism, humour and fuzzy critters keeping the sting in the tail of the Vixen. 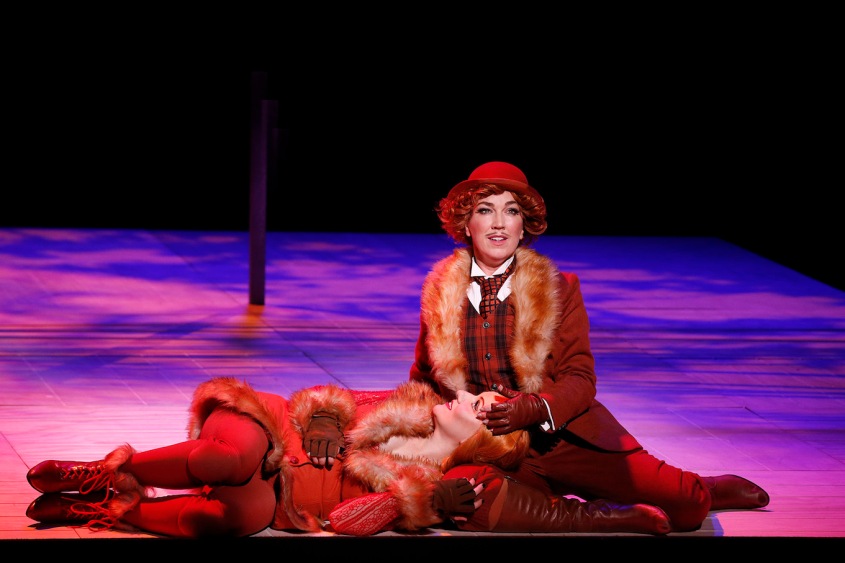 I adored the score, and conductor Jack Symonds and his orchestra masterfully kept the production moving even during some slow moments. In fact, as much as I enjoyed the libretto, the opera could have been performed entirely without words and I admit I would have enjoyed it just as much. Despite the serious subject matter, the production is playful and light; director Stuart Maunder has clearly had a great deal of fun during the creative process, and it shows most clearly during the moments when the animals and insects are on stage.

The opera opens with a whole forest of animals and bugs anthropomorphised by the Adult and Children’s Choruses beautifully setting the stage for the feverish weirdness that is coming. The animal costumes (Roger Kirk), particularly the frog (Lisha Ooi), are magnificent, and are honestly one of the highlights of the show. The eponymous young Vixen (Ruby Ditton) plays with her mother (Celeste Lazarenko), and is captured by the Forester (Barry Ryan) as a pet for his children. She grows up, and the adult Vixen (Lazarenko) transforms into a Marxist feminist – taunting the other animals for their backwards views and yearning for her freedom. After a wildly funny hen massacre (RIP the marvellous Cockerel) she flees, meets a charming Fox (Antoinette Halloran) and falls madly in love.

Meanwhile, the Forester basically falls into melancholy drinking with his friends the Schoolmaster (Brenton Spiteri) and the Parson (Jeremy Kleeman), ruminating on the missing Vixen and mercilessly taunting the Schoolmaster for loving a local gypsy woman Tyrenka (Danielle Calder). Frankly, I could have done without the weird human subplots: the Vixen’s story was far more interesting than all the male human characters combined, and I really didn’t need the inclusion of Tyrenka’s wedding to the unfortunately sappy Harašta (valiantly portrayed by Samuel Dundas).

The whole ensemble performed wonderfully and with a sense of mischievous playful fun, particularly Lazarenko and Halloran (who I was secretly hoping would be an anthropomorphised lesbian fox duo). Despite such misgivings, there’s so much to be charmed by in this opera: the choruses perform their animal alter-egos with inventive physicality, and the singing from every cast member is an absolute delight.

Overall, I thoroughly enjoyed the weirdness of Cunning Little Vixen, and it seemed the opera’s playfulness transferred to the audience, as they suppressed giggles both times the cast sang ‘Looks like she has a new muff’. I’d recommend this show for anyone who enjoys inventive costumes and/or subtle proto-feminism: it was a beautifully crafted ride.