A show to grant all your wishes

Soaring into a world of imagination, music, sequins and rich Middle Eastern textiles, the iconic Disney-cartoon-turned-Broadway-musical Aladdin has hit the stage of Her Majesty’s Theatre, kickstarting Melbourne’s 2017 premiere season. 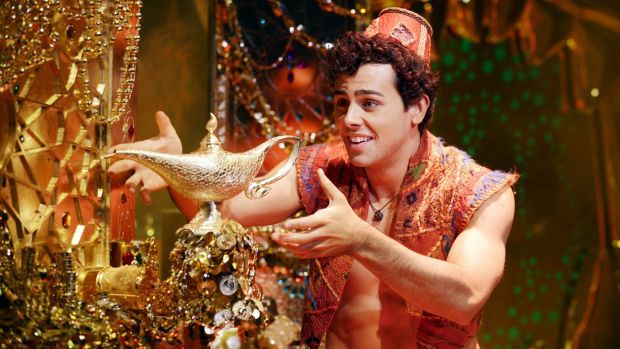 Aladdin, under the clever direction and choreography of Casey Nicholaw, follows the fairy tale story of the street-wise orphan who unexpectedly finds himself master of a vivacious genie with the power to transform him into a prince and win Princess Jasmine’s heart.

The fast-paced musical closely mirrors the nostalgic cartoon in look and feel. The stage was luxuriously draped with backlit silk drops, hanging pendent lights and texturally rich Arabian rugs and patterns designed by Bob Crowley. A series of appropriately-themed new songs were composed for the stage musical that successfully complimented the original score maintaining the song’s original themes and overall feel, while the well-known favourites (composed by Alan Menken with lyrics by Tim Rice, Howard Ashman and Chad Beguelin) from the original score were all present. “Arabian Nights”, “One Jump Ahead”, “Prince Ali”, “Friend Like Me” and of course “A Whole New World” all dazzle on stage, with the latter successfully incorporating the illusive magic carpet effortlessly flying through a darkened backlit stage of speckled light.

The musical was well cast with impressive leads and a vocally and visually strong ensemble. Ainsley Melham (Aladdin) fit the build and imagination as the lovable lead: he was vocally precise with a solid appealing stage presence and when coupled with his petite co-star Hiba Elchikhe (Princess Jasmine), their characters had a beautiful chemistry together, (although I sometimes wasn’t sure if Jasmine was from the Middle East or the Bronx – there were a few inconsistencies across the board with accent choices).

Hands down Michael James Scott’s larger-than-life presence as the sassy blue Genie stole the show. Shaking the audience to life with topical Australian-tailored comedic references and oozing with glitter and energy, he riveted the audience with his songs and consistently provided comic relief for the narrative, which was well counter-balanced by evil doo-er Adam Murphy (Jafar), who literally seemed to be a delicious reincarnate of the cartoon character.

The sound quality, similarly to the lighting design by Natasha Katz, was vibrant and punchy however periodically Elchikhe’s voice was lost in the mix, overpowered by her male counterparts voices and instrumentation. Similarly, there were a couple of lyrics that were lost in the Genie’s numbers: however, I’m sure these minor sound issues will be quickly ironed out by opening night.

Overall, this musical has it all and is a perfect night out for children big (yes, even the adults won’t be able to resist) and small. This pacey, high-energy musical is gloriously bursting with colour and pyrotechnics and upbeat music. It opened in Melbourne this week, so take advantage of this while you can!

Wednesday and Sunday matinees at 1pm

Bookings: Call Ticketek agency 132 849, visit the website Tickettek.com.au or any Tickettek agency or the Box Office in Her Majesty’s Box Office opens two hours prior to all performances for door sales and ticket collections.