Cabaret doesn’t get more macabre and twisted than in Suburban Gothic. There is definitely “some spooky shit going down” in the show, but what makes it even more unnerving is that it is all apparently taking place just down the road from where you live – or even closer to home… 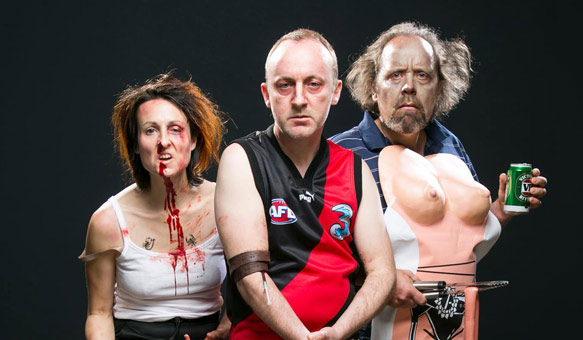 What initially seem like charming and innocuous cabaret songs soon turn grim and morbid at the masterful musical hands of writers Karlis Zaid, Mark Jones and Karin Muiznieks. The songs and a torrid trio of stories cleverly expose the dark underbelly of the suburbs in wry and witty ways, with no topic taboo.

Thus, a happy inner-city-dwelling couple head off to a friend’s house in Caroline Springs only to become frustrated and panicked upon getting lost in the ‘burbs, a “proud” father-of-the-bride gives a heartfelt wedding speech to his daughter and her “terrorist” husband Miguel, and two strangers at a park battle it out as to who is the prouder parent.

Performers Aurora Kurth, Zaid, and Jones all have strong commanding voices on stage, well-crafted characterisation, and Kurth and Zaid’s duets are especially impressive. Jones accompanies these original songs on piano with his usual aplomb, and the numbers create an intended atmosphere of apprehension and uncertainty when arrangements of mostly upbeat “happy” music contrast unsettlingly with the grim and satisfyingly satirical tone of the lyrics.

Meanwhile, the settings of each song and scene are successfully constructed with minimal set pieces and a few quick wardrobe changes, allowing the audience to fully immerse themselves in the performance. This is all supported by Steven Gates’ simple but meaningful direction of the cast, and the neat and discrete lighting effects.

It’s a complex mixture of feelings when Suburban Gothic ends. It’s a highly entertaining and ruthlessly funny and clever show, it’s also quite relentless in digging deeper and deeper into the things we usually would rather not think about or want to be confronted with. When the nervous laughter has subsided, we can of course take comfort, however, in knowing that it was just a show and these sorts of things don’t happen here. After all, as the trio say on stage, it’s all mostly satire. Mostly.