Returning for an encore season during the Melbourne Fringe Festival, BlaaQ Catt is a show that you simply cannot afford to miss. Produced, written and performed by Maurial Spearim, it is a powerful performance and story about how far modern Australia has got to go to make right the wrongs it has committed against the original inhabitants of this land. 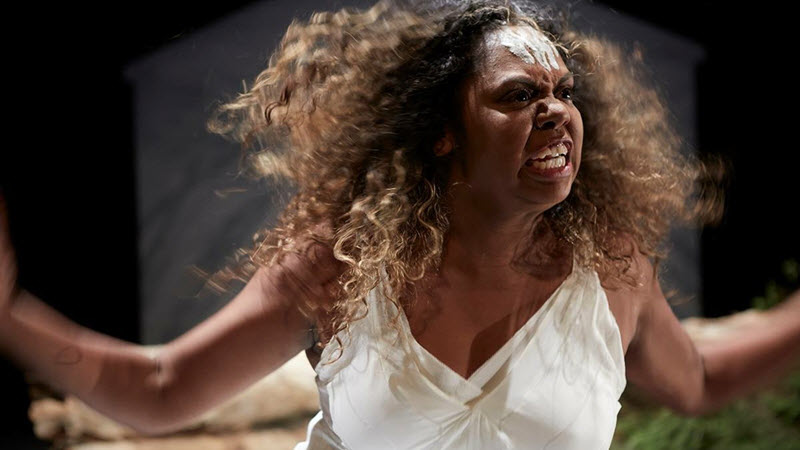 Spearim plays Ruby, a First Nations woman, who takes us through the history of her people, predominantly around the white invasion of their land up until the present day. Referring to events such as the Waterloo Creek Massacre conflict between mounted police and indigenous Australians in January 1838 as well as other significant Indigenous historic moments including their recognition in having the right to vote and the Mabo case, Spearim paints a picture that many refuse to acknowledge or accept.

While there is much factual information and confronting scenes, Spearim balances the tone and mood of the play by incorporating moments of light humour, such as when Ruby is asked by a classmate how to say TV in “aboriginal”. Spearim also performs a number of traditional songs, dances and storytelling through the Gamilaraay language, reminding us of her ancestors – past and present – and allows us to attempt to understand what she has lost.

Spearim has a strong presence on stage and no matter what she is doing, we cannot take our eyes off her. The complexity and range of emotions she displays throughout, switching from one to another, are a testament to the performance skills she possesses.

An evocative symbolic set design by Leon Salom includes a cut-down tree lying on the ground, a representation of Ruby’s culture cut down and dying. Next to it, rising from the ground is a white, large imposing skyscraper indicating the white settlers’ decimation and continual domination of the land. The sound design by Mark Coles Smith and Andre Vanderwert‘s projections work well together to support the set design and further strengthen the affecting ambience of the performance.

BlaaQ Catt demands that we not only acknowledge Australia’s violent history and ongoing racism, but that we do something about it. We are shamed, we are culpable and we are responsible for what has happened and continues to happen. This is an engaging and powerful piece of work that speaks volumes on the state of this country and our treatment of its people.