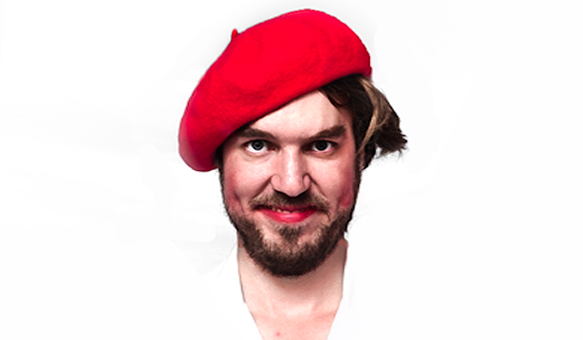 As with his previous shows, this is a combination of scripted absurdist comedy with many opportunities for improvisation and off-the-cuff humour, with much of this born from Ladgrove’s interactions with his audience. A running joke on the night I attended was based around two people working in the medical profession and Ladgrove attempting to explain things in medical terms so that they would understand.

It’s the type of show that the more the audience feeds him, the bigger and crazier the show will get, such as the woman who very happily volunteered to lick sauce off Ladgrove’s chest and a male audience member nonchalantly removing his t-shirt because he was asked to. However, Ladgrove is aware of boundaries and there is never a moment where anyone who puts their hand up is made to feel uncomfortable or unsafe, as his skill at reading the room is highly accurate.

While this is a one-man show, Ladgrove’s tech Nathan is just as involved in Neal Portenza et al, telling him what to do and also what not to do, and injecting moments into the show that seem to genuinely surprise Ladgrove and delight the audiences. It’s a great, collaborative relationship the two seem to share and adds another element of surprise as to what the audience can expect.

There’s no story or over-arching theme in this type of comedy. To even attempt it would be a disservice to Ladgrove and the work he is trying to create: because, for a moment in time, you were in a room, watching Neal Portenza doing things and saying things that are so utterly ridiculous that you cannot help but laugh. A lot.